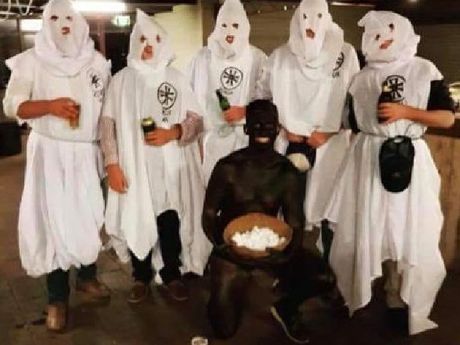 DRESSING up as the Ku Klux Klan, Hitler, Holocaust survivors and in blackface has earned Charles Sturt University (CSU) students suspensions or other penalties for causing “global outrage”.

The university issued punishments two weeks after students dressed in the outfits – the man in blackface holding a basket of cotton – for a June 14 party near its campus in Wagga Wagga.

A caption on the image of five students in white hoods and one covered in black paint said: “Very very politically incorrect. Cotton prices are unreal thought so it’s a great time to be pickin’.”

The other students dressed up as Jewish Holocaust prisoners and one as Hitler in a Nazi uniform,

In a statement on Monday, CSU Vice-Chancellor Professor Andrew Vann said: “These images resulted in global outrage and contact to the University from individuals around the globe.

“On a local level, it deeply offended our indigenous and Jewish communities.”

Read the article in the Whitsunday Times.