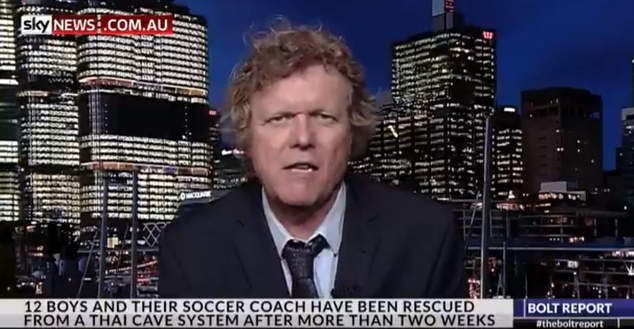 Sky News host Rowan Dean has added to his claim that the rescue of twelve Thai soccer players and their coach owes a debt of gratitude to fossil fuels and an absence of gender fluidity among the rescue divers.

Dean was a guest and Andrew Bolt’s The Bolt Report on Wednesday night and added support of Israel into his theory of what made the rescue that gripped the world possible.

The editor of The Spectator magazine said his comments had ‘freaked out lefties’ so he assumed he had “hit on some sort of truth.”

Dean said that the Australian diving team who assisted in the rescue had been focused on their task and weren’t spending their time thinking about gender fluidity – and this was a key factor in the success of the rescue.

The outspoken TV host said that a focus on being the best, excellence, expertise and dedication had been responsible for saving the trapped soccer team – he also said it was important to remember that the team was comprised of boys, and it was men who had saved them – and none of the people involved had probably ever played with dolls.

Read the article by OIP staff in OUTInPerth.