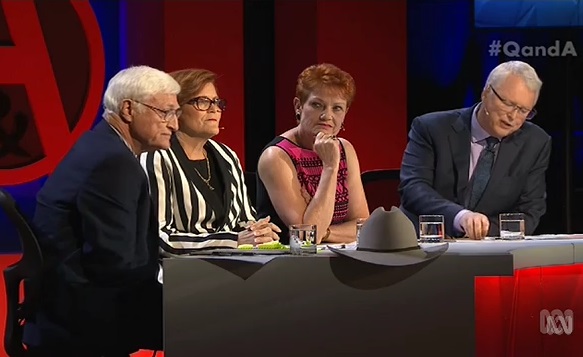 On the ABC Q&A program (Aug 27th) the host Tony Jones asked Bob Katter MP why he gave 1,000% support to a speech by Fraser Anning that talked about a “final solution” in relation to the issue of Muslim immigration . Bob Katter in his response referred to remarks made by the right-wing Jewish activist Avi Yemini.

BOB KATTER
I will let Avi Yemeni have the last say. He can answer the question. “As Australia’s proudest Jew, I’m sickened because, once again, the perpetually outraged are up in arms about something they care nothing about. They’re using the pain and suffering of my community, the horrors of the Holocaust that my grandparents escaped, to push their agenda. Many of those that are pushing that narrative hate Jews. In fact, The Islamic Council, etc, etc… Fraser Anning has done more for the Jewish community and Israel than most of those who are outraged have done in their entire careers.”

This has provoked a media release by the Executive Council of Australian Jewry:

Statement by Anton Block, President of the Executive Council of Australian Jewry

Comment by the Hon Bob Katter MP on Q &A program
On the Q & A program on ABC TV on 27 August 2018, one of the panelists, the Hon
Bob Katter MP, was asked a question about the reason for his support for the call by
Senator Fraser Anning for “a final solution to the immigration problem” in his maiden
speech. Senator Anning was calling for a popular vote on the issue, but his use of the
words “final solution” in that context was widely condemned, including by our
organisation, which described it as “a chilling reminder of how the process of
dehumanisation begins”.

In seeking to justify his defence of Senator Anning’s speech, Mr Katter read out a
supporting statement by a lone member of the Jewish community, a Mr Avi Yemini of
Melbourne, who regularly publishes radical right-wing views on his social media page.
Mr Katter then concluded: “That reflects the Jewish position in this country”.

The opinions of Mr Yemini which were read out by Mr Katter most certainly do not
reflect “the Jewish position in this country”.

Contrary to the assertions of Mr Yemini, the use of the expression “final solution” by
Senator Anning, and his positive references to Australia’s former White Australia policy,
were as repugnant to the vast majority of Jews in Australia, especially to Jewish
survivors of the Holocaust and their descendants, as they were to the vast majority of Australians generally. It was heartening to see the rare cross-partisan consensus in
condemning those aspects of Senator Anning’s speech.