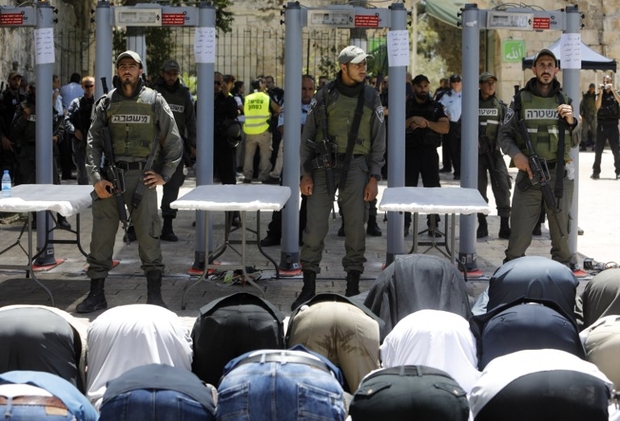 Muslim worshippers, who refuse to enter due to new security measures including metal detectors and cameras, pray as Israeli border policemen stand outside the Lion's Gate, a main entrance to Al-Aqsa mosque compound, in Jerusalem's Old City, on July 16, 2017, after security forces reopened the ultra-sensitive site. Israel took the highly unusual decision to close the Al-Aqsa mosque compound for Friday prayers, leading to anger from Muslims and Jordan, the holy site's custodian. It remained closed on July 15, while parts of Jerusalem's Old City were also under lockdown. / AFP PHOTO / MENAHEM KAHANA

The Australia/Israel and Jewish Affairs Council (AIJAC) said the Morrison government’s willingness to consider moving the Australian embassy to Jerusalem is a step towards resolving the Palestinian-Israeli conflict.

Prime Minister Scott Morrison said earlier this week he is considering following the US decision to move the Australian embassy from Tel Aviv to Jerusalem.

He denied the timing of his remarks had anything to do with winning the Jewish vote in the Wentworth by-election, which has one of the largest Jewish populations of any electorate in the country.

About 12.5 per cent of voters in Wentworth are from the Jewish community.

‘Right thing to do’

Jeremy Jones, from the Australia/Israel and Jewish Affairs Council, says he believes the decision is a step towards restarting the peace negotiation process in the decades-long conflict.

“Is it the right thing to do? Now if it is the right thing to do then you would say okay it may have implications for how people vote, but it is not done for the purpose of winning votes, it is done because it is right,” he said adding that most Jewish voters had already cast their postal votes before Mr Morrison’s remarks because the Wentworth by-election fell on Saturday – the Sabbath.