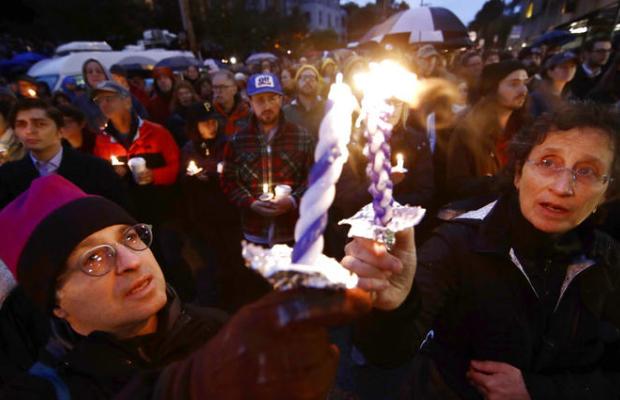 People light candles as they gather for a vigil in the aftermath of a deadly shooting at the Tree of Life Congregation, in the Squirrel Hill neighborhood of Pittsburgh, Saturday, Oct. 27, 2018. (AP Photo/Matt Rourke)

The murder of 11 Jews in a Pittsburgh synagogue is a crime that will be felt in every Jewish home. “All Jews must die,” yelled the shooter, Robert Bowers, as he stormed the Tree of Life Synagogue.

Sure, this was just one maniac — a white racist who’d damned President Donald Trump for not stopping the “infestation” of the United States by Jews. But Bowers’s hatred is now seen in too many guises.

Just last week, Louis Farrakhan, leader of the US Nation of Islam, called Jews “termites” in his speech for the annual Million Man March, and sent the video to his 960,000 Facebook followers.

In Germany, Chancellor Angela Merkel last April warned of the rise of a “different type of anti-Semitism” — the usual neo-Nazis had been joined by Arab refugees.

In France, too, immigration has added to the danger. Last year, nearly 40 per cent of violence classified as racially or religiously motivated was committed against Jews, though Jews make up less than 1 per cent of the population.

And Jew-hatred menaces Israel itself. Last weekend some 15 rockets were fired into Israel from Gaza, most by Islamic Jihad terrorists.