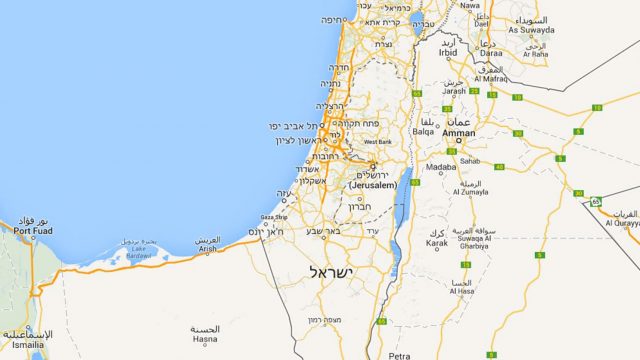 The removal of Palestine by Google Maps

If you search for Palestine on Google Maps, you won’t find it. Palestine, the name most continuously used for the territory lying between the Jordan River and the Mediterranean Sea from the fifth century BCE, is labelled Israel. Protestors in the Middle East, and on social media, have demanded that Google relabel the region of Israel as “Palestine”, a name Google says has never been used on their mapping service. In late 2016, there was outrage when Google Maps deleted the names “West Bank” and “Gaza Strip” leaving only dotted lines indicating borders still undefined. Google restored the labels, but without any reference to Palestine in these Israeli-occupied areas. So why isn’t Palestine on the map? And how does mapping shape people’s understanding of the world?

Under the search heading “Palestine”, you can rotate a 360-degree photograph to see the country. The ground, covered in limestone rocks, spreads across the open landscape to distant mountains with clusters of trees in between. There are no buildings. It looks uninhabited. The awful truth is that Palestine has been forced to make the terrible transition into non-existence by Israel’s existence.

According to Wikipedia, “Palestine is a de jure sovereign state in the Middle East” – a term selected by the United Nations in 2013 – “claiming the West Bank and Gaza Strip with Jerusalem as the designated capital”. The State of Palestine is recognised by 138 of the 193-member UN General Assembly but not by the US and much of the west.

There are web-mapping services that do recognise Palestine. Bings Maps labels the West Bank as Palestine, a “geographic region in Western Asia usually considered to include Israel, the West Bank, the Gaza Strip, and in some definitions, some parts of western Jordan”. A traveller to Jordan told me, “It works both ways. All the local maps in English and Arabic showed the territory to the west of the pre-1967 borders as blank space. In other words ‘Israel’ didn’t exist. Israel was (and continues to be) regarded as an illegitimate cultural and political entity by Fatah, Hamas and most other Arabic-speaking political elites and much of their population.”

I thought I might find Palestine on my old 1972 National Geographic cultural map of the Middle East, but it shows Israel with the West Bank and Gaza Strip marked as “Arab”, the rest as “Jew”. Of the peoples described there: Kurd, Bedouin, Persian and more, Palestinians are not mentioned. As far as Jews are concerned: “Immigrants – so diverse that only the declaration ‘I am Jew’ unites them – become citizens of Israel upon arrival. Jews from Europe spearheaded the transformation of Arab Palestine into a Westernised Jewish state.”

Read the article by Katherine Seppings in The Big Smoke -Australia.