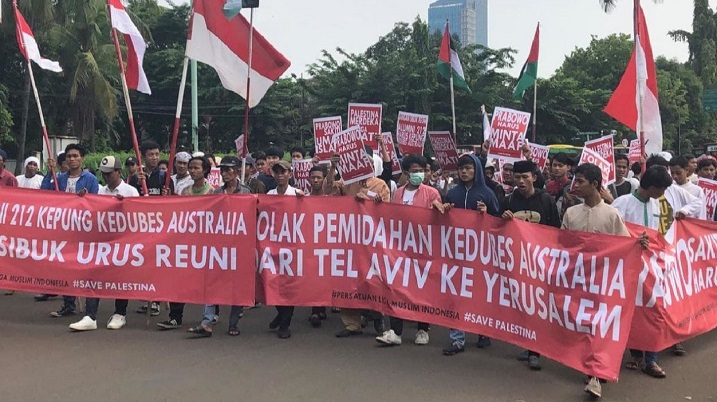 Several hundred Indonesian protesters have demanded Canberra drop any plans to move its Israel diplomatic mission to Jerusalem, calling on other Islamic groups to occupy the embassy, raising ­security concerns over an issue that already threatens to derail one of Australia’s most important relationships.

Yesterday’s protest was a more peaceful affair, with the banner and flag-waving crowd made up mainly of students and middle-aged housewives.

Protesters warned any move to shift the embassy from Tel Aviv to Jerusalem would be akin to “provoking Indonesian Muslims and Muslims around the world to fight against Israel and Australia”.

“That’s what will happen if Australia continues its plan to move its embassy from Tel Aviv to Jerusalem,” lead protesters of the Indonesian Muslim League to Save Palestine warned over a loud speaker after Friday prayers.

“We want Australia to be friends with indonesia but if it follows in the footsteps of the US and acknowledges Jerusalem as the Israeli capital that is a huge mistake.”

By Amanda Hodge and Nivell Rayda in The Australian.