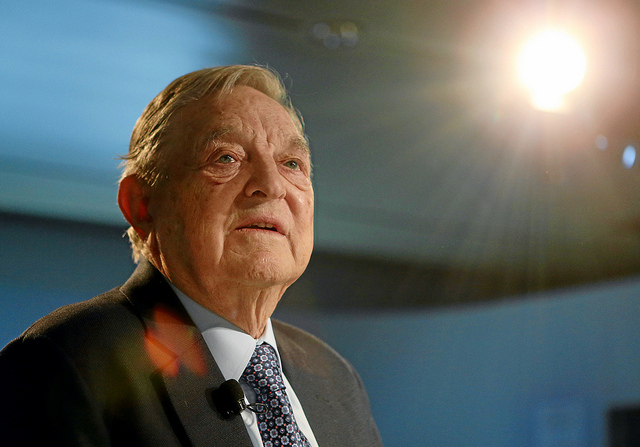 Anti-Semitism has a new name

Over the centuries, Jews have been blamed for all sorts of ills in Christian and Muslim societies, from the Great Plague of the 14th century to the financial crashes of modern times. In 1903, The protocols of the elders of Zion, produced by Imperial Russia’s secret police, ‘exposed’ a diabolical Jewish plot to achieve world domination by promoting liberalism—and became a pretext for anti-Semitism in Europe. These narratives endure to this day, only now they are being projected onto a single Jew: George Soros.

Right-wing, anti-globalist conspiracy theorists—a group that now includes US president Donald Trump—demonise Soros, a wealthy Jew who is deeply committed to liberal causes. The former Fox News host Bill O’Reilly described Soros in 2007 as ‘off-the-chart dangerous’ and ‘an extremist who wants open borders, a one-world foreign policy, legalised drugs, euthanasia, and on and on.’ For the Texas-based Infowars founder Alex Jones, Soros is nothing less than ‘the head of the Jewish mafia’ conspiring to derail Trump’s presidency.

Such figures imagine the hidden hand of the ‘leftist billionaire’ almost everywhere. When a caravan of desperate Central American asylum seekers began walking all the way to the United States border before the recent US midterm elections, it was a ploy by Soros to win a Democratic majority in Congress. When survivors of February’s mass shooting at Marjory Stoneman Douglas High School in Parkland, Florida, launched a gun-control campaign, Soros was supposedly bankrolling them. And it was Soros who arranged for Christine Blasey Ford to testify that Trump’s pick for the Supreme Court, Brett Kavanaugh, had sexually assaulted her.

Soros was also supposedly behind the sexual-assault survivors who confronted Senator Jeff Flake in an elevator to demand an investigation into the Kavanaugh accusations, just as he orchestrated the Women’s March, a worldwide protest held the day after Trump’s inauguration. He was even pulling the strings when the NFL quarterback Colin Kaepernick knelt during the national anthem to protest police violence against black people.

But Soros’s imaginary designs are hardly limited to the US, nor are they all recent. He has, his detractors declare, single-handedly destabilised governments in Malaysia, Thailand, Indonesia, Japan, Russia, France and the United Kingdom.

How did Soros come to be such a larger-than-life villain?

Soros is what the late historian Isaac Deutscher would call a ‘non-Jewish Jew’—one who sought ideas, inspiration and fulfillment beyond the boundaries of Jewry, and yet continued to belong to the Jewish tradition. That stance often enables the non-Jewish Jew to make important contributions to science, culture and politics.

Read the article by Shlomo Ben-Ami on The Strategist.