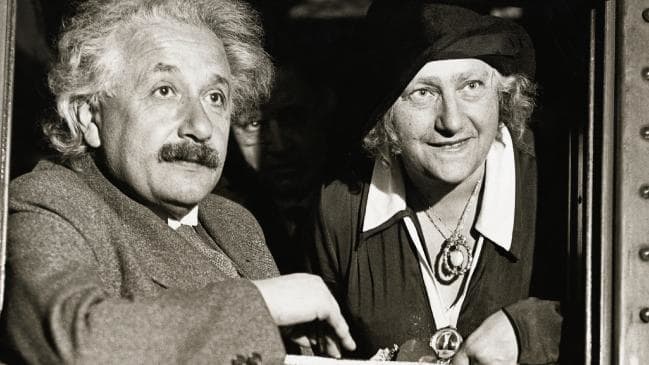 Einstein: was he relatively racist?

Hitler was a Nazi? Really? Einstein was a racist? The publication of ­Albert Einstein’s Travel Diaries, covering his visit to the Far East, Palestine and Spain in 1922 and 1923, has generated some controversy. What is in the diaries, and how have they been framed?

First, the framing. The immediate answer is that they have been framed beautifully, in a format rarely seen in publishing these days. Black boards, gold lettering, mock marbling on the end pages. Sumptuously presented; beautifully illustrated; parallel text, a facsimile of the ­German original verso and English translation recto with full scholarly apparatus and appendices. Princeton University Press and the Einstein Papers ­Project know no apparent limits when it comes to publication standards. This is a beautiful book to hold and to read.

There is, of course, another framing, from the editors and especially from chief editor Ze’ev Rosenkranz, whose own story, as he tells us, begins in Melbourne’s St Kilda, ‘‘still a bit seedy’’, and its Jewish community after World War II.

Rosenkranz alludes to the normality of everyday racism and the pervasive anti-Semitism of those times. The closing words of his preface bring us to our own times: ‘‘It seems that even Einstein sometimes had a very hard time recognising himself in the face of the Other.’’

The mainframe that follows is Rosenkranz’s Historical Introduction. It is fastidious in every sense, scholarly and political. Into the 1920s Einstein was a celebrity; his 1921 Nobel prize had arrived in 1922. He had begun to travel, first to the US in league with the planned project for the Hebrew University of Jerusalem.

To this point, his frame of reference was largely European. When he was young he did not think of himself as a Jew, but as a man. The 1922 assassination of foreign minister Walther Rathenau had accentuated Einstein’s own sense of vulnerability in Weimar Germany. It was a good time to step out.

Read the article by Peter Beilharz in The Australian.