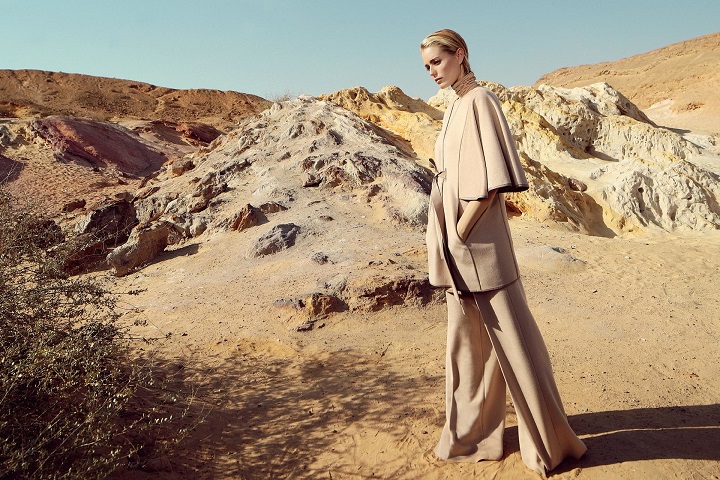 How Israel’s first fashion house is staging its revival

Once famed for its textile work with Yves Saint Laurent and Givenchy, the storied Israeli house of Maskit has been revived.

“Hand-work brings the soul and uniqueness into a garment,” says Sharon Tal, the creative director behind the regeneration of Israel’s first fashion house, Maskit. Embroidery is Tal’s personal passion; she used to produce it for Alexander McQueen. “The amazing thing is when embroidery is made by hand it will be one-of-a-kind no matter what – it will always come out differently,” she says. The same applies for Maskit staples: hand-loomed fabrics, hand-sewing and trimming. “I truly believe that authenticity is the new luxury.”

It’s an idea that resonates in this era of digital perfection. We’ve grown used to Facetune and Instagram filters, to mass production and a sort of factory-churned identikit sameness across products, packaging and even music. Digital printing, the robot economy and new frontiers in AI will further tip the balance towards machine. Of course, it can be very exciting, this brave new world. But in such a context, we yearn, I think, for a bit of Tal’s authenticity. For tradition and humanity. Some evidence that the products we covet have been created by human hands. One of the ways high fashion can respond is through the elevation of craft. The artisanal brings the magic. It takes highly skilled practitioners, and it takes time.

The Maskit story begins in 1954, six years after the State of Israel was created, with Ruth Dayan, wife of Israeli military commander Moshe Dayan. They were a privileged couple (“almost like royalty”, says Tal) but Dayan was a roll-up-your-sleeves sort, moved by the hardship around her to try to make a difference.

“Israel had immigrants from 70 countries flooding in,” Dayan recalled in a 1981 interview with The Washington Post. “They were living in tents on the sites of their new villages … I had been a farm woman – Moshe and I met when I went to agricultural college at 17. I milked cows and goats and made cheese and farmed off and on for years … I thought I would work with them to help them farm. But there was no money and no water. Whatever was planted was eaten by the rats overnight. At first, people couldn’t even grow a tomato.”

Read the article in Vogue Australia.