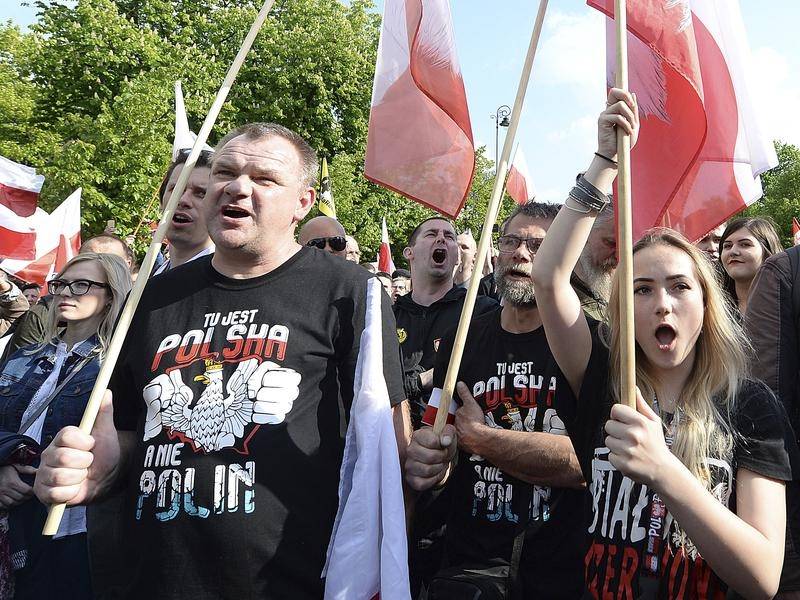 Thousands of Polish nationalists marched to the US Embassy in Warsaw, protesting that the US is putting pressure on Poland to compensate Jews whose families lost property during the Holocaust.

The protest took place on Saturday amid a dramatic rise in anti-Semitic hate speech in public life in Poland and it appeared to be one of the largest anti-Jewish street demonstrations in recent times. It also comes as far-right groups are gaining in popularity, pressuring the conservative government to move further to the right.

Protesters, including far-right groups and their supporters, say the US has no right to interfere in Polish affairs and that the US government is putting “Jewish interests” over the interests of Poland.

Poland was a major victim of Nazi Germany during World War II and those protesting say it is not fair to ask Poland to compensate Jewish victims when Poland has never received adequate compensation from Germany.

Among those far-right politicians who led the march were Janusz Korwin-Mikke and Grzegorz Braun, who have joined forces in a far-right coalition standing in the elections to the European Parliament later this month. Stopping Jewish restitution claims has been one of their key priorities, along with fighting what they call pro-LGBT “propaganda.” The movement is polling well with young Polish men.

Prime Minister Mateusz Morawiecki echoed the feelings of the protesters at a campaign rally on Saturday, saying that it is Poles who deserve compensation.

Read the article by Vanessa Gera in the Canberra Times (AAP).