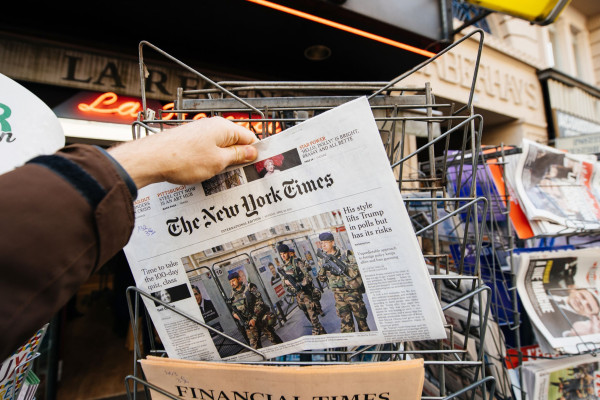 PARIS, FRANCE - APRIL 24: Man buy looks at press kiosk at US The New York Times newspaper with pictures of soldiers vigipirate walking with Elections posters in the background - secure measures after attacks in Paris

The New York Times has announced it will stop publishing political cartoons in its international edition from next month.

The decision comes less than two months after the publication came under fire for publishing a cartoon featuring Benjamin Netanyahu and Donald Trump, which many dubbed anti-Semitic.

“To see a newspaper dump all cartoons is a knee-jerk reaction, and one which is over the top,” he told 3AW’s Tom Elliott.

“We were supposed to be heralding the age of free speech, diversity of opinion and the contest of ideas, and I think it’s all going the other way.

“I think people are scared of the outrage industry and the damage it can do to one’s business if an online campaign starts with boycotts and threats.”

Mr Knight is no stranger to controversy.

He was widely criticised for a controversial cartoon he drew of Serena Williams last year, but he said it hasn’t changed the way he approaches drawing.

“It’s not going to change the way I do things.

“Of course I’m cautious about what I say, but I always was,” he said.

Read the article and listen to the podcast by Tom Elliott on 3AW.