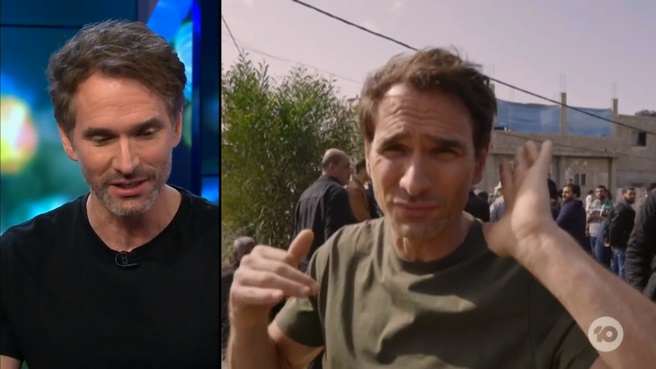 After journeying to the Gaza Strip, Todd Sampson revealed he’s received death threats ahead of the new season of his show ‘Body Hack’.

Sampson spent three weeks in Gaza, documenting the harrowing jobs of medics and first responders in the long-time conflict zone.

The documentarian stopped by ‘The Project’ and confirmed to the panel that — despite this season not even being aired yet — it has already made him the target of online abuse.

“Unless it’s journalists actually threatening me, it’s people that have only seen the promo,” Sampson said.

He said he received a message earlier just hours before appearing on The Project, which he said read: ‘You curse Israel’.

“Which I don’t,” Sampson said, defending the way he has approached the Israel-Palestine conflict in the series.

He said the message continued to say: “you will continue to suffer the wrath soon”.

“But wrath is spelt ‘rathe’ and I felt like saying, ‘hold onto the wrath until you’ve seen the film and spellcheck,” Sampson laughed.

Sampson described his first tense 10 minutes in Gaza, saying he had the help of a local fixer who guided him and his ‘Body Hack’ crew into the conflict zone.

“We arrived on a Friday and she [the fixer] said, ‘would you like to go to the protest now?’,” he said.

Read the article by Michaela Morgan and watch the report on Channel 10.

[This episode of Body Hack can be viewed on the 10 Network’s 10Play.]