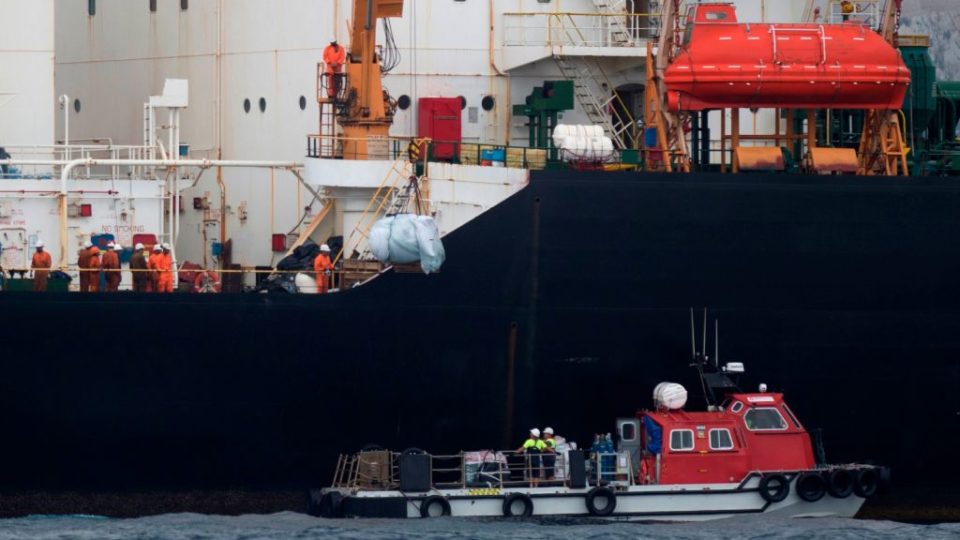 A ship approaches supertanker Grace 1 off the coast of Gibraltar on July 6, 2019. - Iran demanded on July 5, 2019 that Britain immediately release an oil tanker it has detained in Gibraltar, accusing it of acting at the bidding of the United States. Authorities in Gibraltar, a British overseas territory on Spain's southern tip at the western entrance to the Mediterranean, said they suspected the tanker was carrying crude to Syria in violation of EU sanctions. (Photo by JORGE GUERRERO / AFP) (Photo credit should read JORGE GUERRERO/AFP/Getty Images)

Britain has promised to release a detained Iranian oil tanker if Tehran guarantees the vessel will not go to Syria.

The tanker was seized last week by British Royal Marines off the coast of the British Mediterranean territory of Gibraltar on suspicion of violating sanctions against Syria.

Iran on Saturday reiterated its call for the ship’s release. It denies the tanker was taking oil to Syria in violation of EU sanctions.

British foreign minister Jeremy Hunt told his Iranian counterpart the Grace 1 oil tanker would be released but only if it does not travel to Syria.

The affair has stoked tension in the Gulf, with Britain saying on Thursday it had fended off Iranian ships that tried to block a British tanker in the area.

Mr Hunt said his call with Iran’s foreign minister Mohammad Javad Zarif was constructive, and Mr Zarif had told him Iran wanted to resolve the issue and was not seeking to escalate tensions.

“I reassured him our concern was destination not origin of the oil on Grace One & that UK would facilitate release if we received guarantees that it would not be going to Syria, following due process in (Gibraltar) courts,” Mr Hunt tweeted.