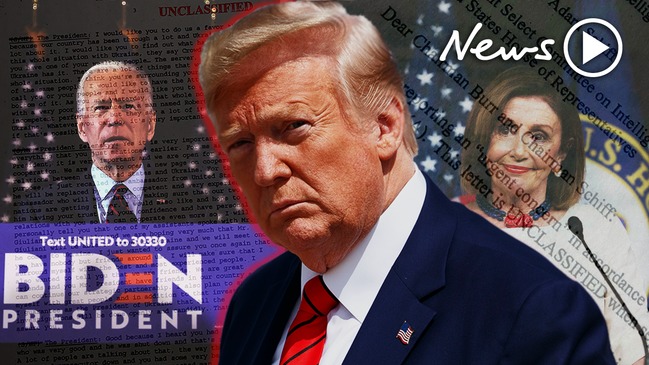 US President Donald Trump is under a cloud after a whistleblower scandal erupted, with a critic saying he’s been “totally exposed”.

Donald Trump’s “false bravado” about the 2020 election has been “totally exposed” by the whistleblower scandal, a leading US commentator says.

American political columnist Mark Shields savaged the US President, saying the impeachment process was the correct path after allegations Mr Trump tried to influence the election.

The President is accused of asking his Ukrainian counterpart to investigate former Vice President Joe Biden and the Democratic candidate’s son Hunter during a phone call with Ukrainian President Volodymyr Zelenskiy.

Democrats say the President violated his oath of office and the reports sparked an impeachment investigation in the House.

During a weekly segment on PBS Newshour with New York Times columnist David Brooks — who argued impeachment was the wrong course to take — Mr Shields said the scandal showed Mr Trump was terrified of losing the election to Mr Biden.

“I mean, what it puts to rest is the lie about the confidence of the Trump campaign: ‘We’re leading in all polls. We’re ahead’,” he said.

“He was so terrified, so intimidated, the president of the United States got on the phone with the leader of Ukraine to get dirt on the one Democrat who in every major poll was beating him and that candidate’s son.

“I mean, this shows the terror, the intimidation. And the false bravado is just totally exposed.”

Mr Brooks argued an impeachment process would overshadow the Democratic primary and give Trump a victory with a widely-expected not guilty verdict in the Republican-dominated Senate.