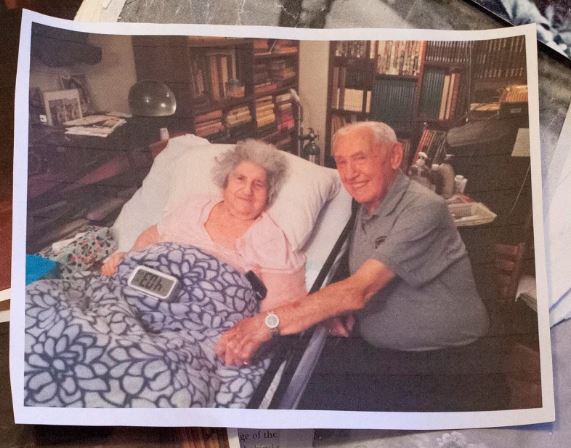 Auschwitz couple who found each other 72 years later

The first time he spoke to her, in 1943, by the Auschwitz crematory, David Wisnia realised that Helen Spitzer was no regular inmate. Zippi, as she was known, was clean, always neat. She wore a jacket and smelled good. They were introduced by a fellow inmate, at her request.

Her presence was unusual in itself: a woman outside the women’s quarters, speaking with a male prisoner. Before Mr Wisnia knew it, they were alone, all the prisoners around them gone. This wasn’t a coincidence, he later realised. They made a plan to meet again in a week.

On their set date, Mr Wisnia went as planned to meet at the barracks between crematories 4 and 5. He climbed on top of a makeshift ladder made up of packages of prisoners’ clothing. Ms Spitzer had arranged it, a space amid hundreds of piles, just large enough to fit the two of them. Mr Wisnia was 17 years old; she was 25.

“I had no knowledge of what, when, where,” Mr Wisnia recently reminisced at age 93. “She taught me everything.”

They were both Jewish inmates in Auschwitz, both privileged prisoners. Mr Wisnia, initially forced to collect the bodies of prisoners who committed suicide, had been chosen to entertain his Nazi captors when they discovered he was a talented singer.

Ms Spitzer held the more high-powered position: She was the camp’s graphic designer. They became lovers, meeting in their nook at a prescribed time about once a month. After the initial fears of knowing they were putting their lives in danger, they began to look forward to their dates. Mr Wisnia felt special. “She chose me,” he recalled.

Read the article by Kerry Blankfield in the Australian Financial Review.