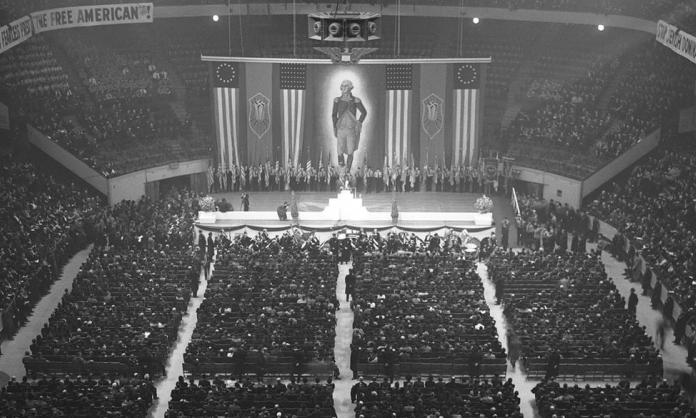 When Trotskyists fought back against New York’s Nazis

On February 20, 1939, the stars and stripes waved next to the swastika in New York’s Madison Square Garden. An enormous crowd sang the Star-Spangled Banner while giving the Hitler salute. Guards in grey uniforms inspired by those of the Nazis’ paramilitary wing stood at attention in front of a 30-foot portrait of George Washington.

The German American Bund had filled the Garden with 20,000 supporters. Attempting to shake their image as a sauerkraut-munching Hitler fan club, the Bund draped itself in the banner of Americanism and celebrated Washington’s birthday. Banners proclaimed “Wake up America!” (copied from Hitler’s “Deutschland Erwache!”). The rally was protected by 450 uniformed stormtroopers from the Bund’s Order Division, their version of the Nazis Sturmabteilung or “Storm Division.”

New York’s Zionist organisations had also failed to mobilise against the Nazis. The SWP reported that they had visited the offices of the Zionist youth organisation Hashomer Hatzair (The Young Guard) on the Lower East Side before the rally. There they were told: Sorry, but we can’t join you. Our Zionist policy is to take no part in politics outside Palestine.”

The SWP responded on March 7 with an editorial calling for an “end to Zionist illusions.” They criticized that the Zionists had “staked everything” on the support of British imperialism, thus wasting the “energies and minds and hearts of millions of Jewish men and women and boys and girls – not to speak of the hundreds of millions of dollars it took.” The Trotskyists countered:

It is an immediate task of our party to get those boys and girls out on the picket line with us next time, to awaken the Jewish people to the realisation that the fight against anti-Semitism, which is the fight against fascism, is here and now!

This appeal did not go unheeded. In 1939, the Nazis’ machinery of genocide was lurching into motion. Yet the Zionist movement, even its socialist currents, did not have any answer to except for the aliyah, emigration to Palestine. They were opposed to any other aid to European Jews, as David Ben-Gurion declared:

If I knew that it would be possible to save all the children in Germany by bringing them over to England, and only half of them to Israel, then I would opt for the second alternative.

The Roosevelt administration was enforcing quotas that blocked any Jewish refugees from the U.S., and American Zionists were at best ambivalent about this. It was left to the Trotskyists to demand: “Enough Pious Tears! Admit the Refugees!”

Jewish young people all over the world were aching for a fight against Hitler. And all over the world, we find cases of activists who abandoned the Zionist movement and joined the ranks of the Fourth International. The list of Hashomer Hatzair militants that became Trotskyists is astoundingly long. It includes: Jakob Moneta and Rudolf Segall, German Jews who had emigrated to Palestine but left their kibbutz and joined the Trotskyist group in Haifa, later becoming leaders of the Trotskyist movement in West Germany; Moshé Machover, a founder of the Israeli socialist organization Matzpen in 1962 (who was recently suspended from the Labour Party in the UK for “antisemitism”); Dov Shas, who fought in the resistance in Romania, and joined the Israeli Trotskyist nucleus around Jakob Taut; Baruch Hirson from South Africa, a Trotskyist who was imprisoned in 1964 for sabotage actions against the Apartheid regime; the intellectual Boris Fraenkel; Chanie Rosenberg, best known as the widow of Tony Cliff / Yigael Gluckstein; Henri Weber, a leader of the Revolutionary Communist Youth during May 1968 in France; and Christian Picquet, who in 2009 left the New Anticapitalist Party to join the Left Front.

But the most famous Zionist-turned-Trotskyist is without doubt Abraham Wejnstok, known by his pseudonym Abraham Leon. As a leader of Hashomer Hatzair in Belgium, Leon set out to write a materialist history of the Jewish people. In the form of theses, he explored how antisemitism had been produced and reproduced over the millennia in different class societies, and came to the conclusion that modern antisemitism was a product of capitalism’s decay. These theses were published, after his murder in Auschwitz in 1943, as the book The Jewish Question: A Marxist Interpretation.

Read the article by Nathaniel Flakin in Red Flag.