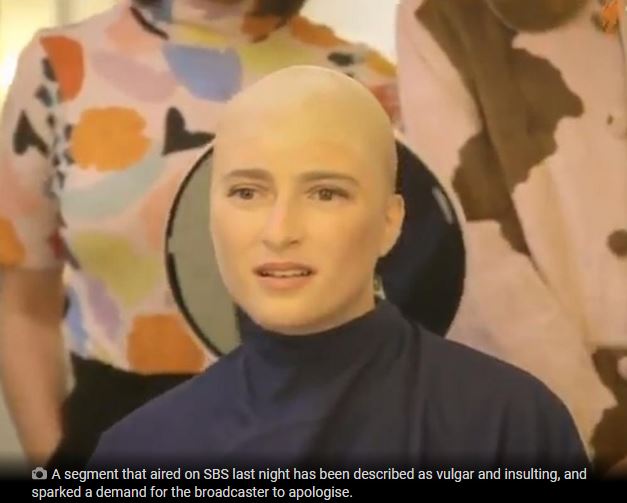 ‘How did this get on TV?’: SBS slammed

A television comedy sketch that featured the Nazi swastika has been described by a prominent civil rights advocate as “vulgar” and insulting.

In it, comedians Jenna Owen and Vic Zerbst were given buzz cuts by Alex Lee, with Zerbst’s skinhead ‘do revealing a distinctive birthmark in the shape of the swastika.

“Okay, can I just say, I do find that symbol very racist and we do not tolerate that sort of hate here,” Lee, playing a celebrity stylist, says in the skit.

“I’m a freakin’ bald Nazi,” she adds, before her character explains that she now has to wear a hat “otherwise I get bashed”.

After it was uploaded to the show’s Facebook page last night, several viewers pointed out the offensive nature of the content and its poor taste.

Dr Dvir Abramovich, Chairman of the Anti-Defamation Commission, today slammed the “thoughtless, immoral and insulting skit” and called on SBS to apologise.

“It’s hard to believe this vulgar material actually made it to the airwaves and that it did not raise any red flags,” Dr Abramovich said. “SBS should have known better.”

Read the article by Shannon Molloy in The Queensland Times.