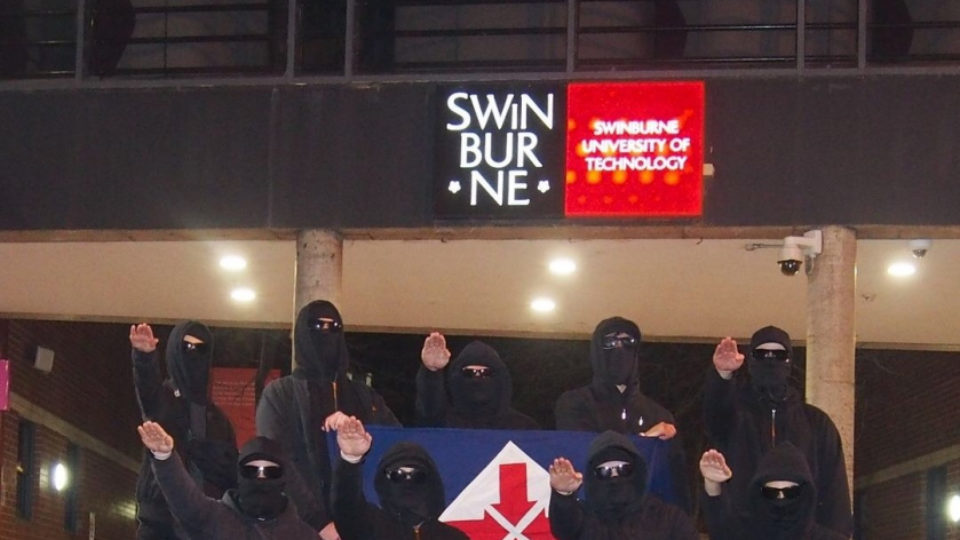 A neo-Nazi group dressed in black with their faces covered have been pictured flashing the Hitler salute at the Swinburne University of Technology in Melbourne.

The National Socialist Network, which advocates white supremacy, posted the image to Russian-based social media network VK with the caption “Swinburne for the White Man”.

It thanked “the student body and faculty” for allowing them to come on campus to advance their far-right agenda “without opposition”.

Swinburne University said the group did not have permission to be on campus and that it “abhors” the symbols depicted in the image, along with their comments.

The photograph shows seven men doing the Nazi salute in front of a Swinburne University logo, while two others held up the group’s flag.

The men concealed their faces, and were clad in matching black hooded tracksuits, sunglasses, and masks.

They do not represent the views of Swinburne staff and students, a spokesperson for the university said.

The men “entered the campus to take the photo and left soon afterwards”, the spokesperson told The New Daily.

“They are not welcome on our campus,” they said.

The New Daily understands the university is not gated, and that despite classes shifting online due to the coronavirus pandemic, members of the public can still enter their premises.

Read the article by Christiane Barro in The New Daily.