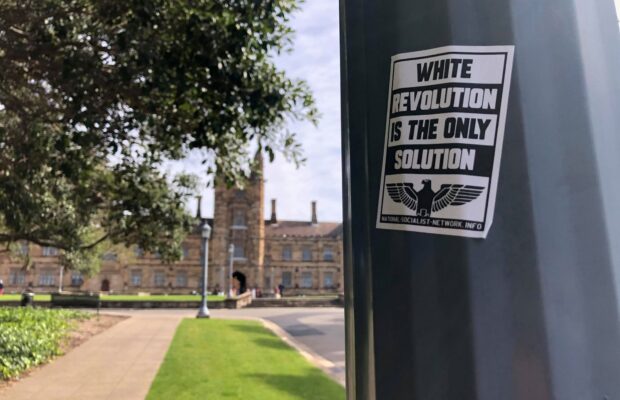 Tens of Neo-Nazi stickers have been plastered on campus near Fisher Library and the Law School.

The stickers appear to be from the National Socialist Network, a group intimately linked with the Lad’s Society and Antipodean Resistance.

This follows similar events by the group at Swinburne University and the University of Queensland within the past month, signalling an orchestrated attempt to target Australian universities.

Antipodean Resistance last postered on campus in 2017 outside the Brennan McCallum learning hub.

In 2019, racist posters were also found in the Engineering and IT precinct on campus.

Last year, Honi also uncovered the presence of fascist organising on campus through leaked Discord chat logs. That investigation revealed Neo-Nazi scrutiny of the University and its student organisations as far back as 2017.

The University has reached out to its security team, who will be providing comment shortly. They say this article will be updated accordingly.

This advisement by Chuyi Wang and Lara Sonnenschein is in Honi Soit.