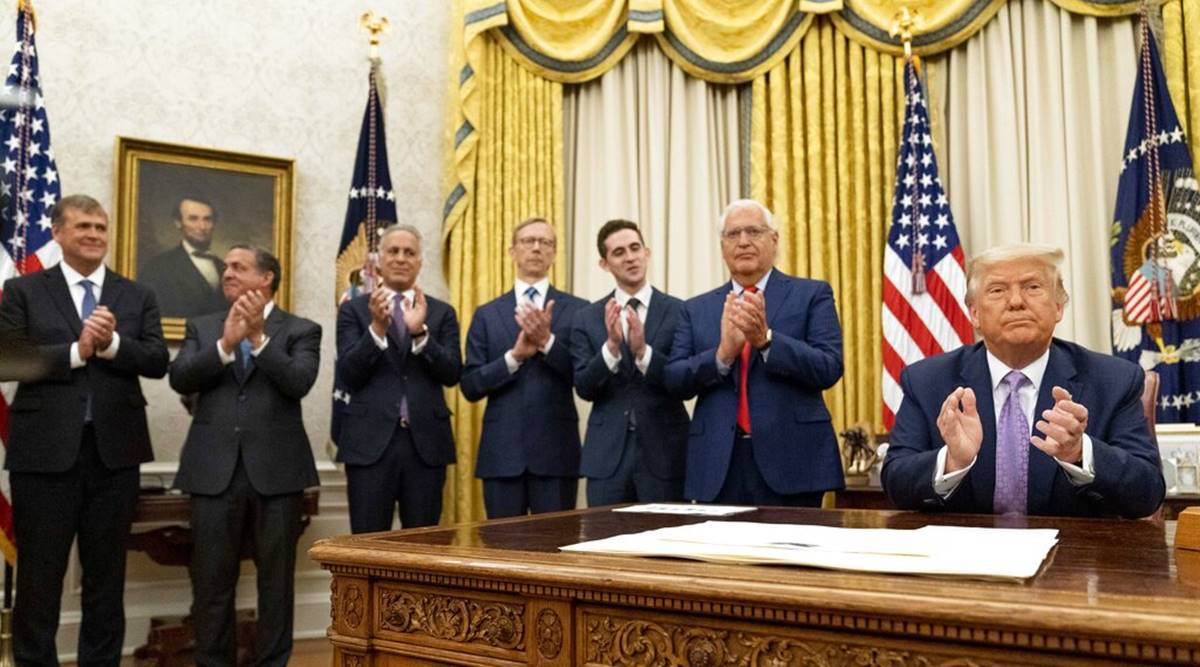 President Donald Trump, accompanied by U.S. Ambassador to Israel David Friedman, second from right, and others applaud in the Oval Office at the White House, Wednesday, Aug. 12, 2020, in Washington. Trump said on Thursday that the United Arab Emirates and Israel have agreed to establish full diplomatic ties as part of a deal to halt the annexation of occupied land sought by the Palestinians for their future state. (AP Photo/Andrew Harnik)

The US is claiming a major diplomatic victory after United Arab Emirates and Israel agreed to establish full diplomatic ties as part of a deal to halt the annexation of occupied land sought by the Palestinians for their future state.

The announcement makes the UAE the first Gulf Arab state and only the third Arab nation, after Egypt and Jordan, to have active diplomatic ties to Israel.

“Today we usher in a new era of peace between Israel and the Arab world,” Prime Minister Benjamin Netanyahu said in a nationally televised statement. “There is a good chance we will soon see more Arab countries joining this expanding circle of peace.”

Palestinian officials have expressed fury over the announcement. They have repeatedly urged Arab governments not to normalise relations with Israel until a peace agreement establishing an independent Palestinian state is reached. A spokesman for the Palestinian president Mahmoud Abbas said on Thursday the agreement amounts to “treason.” Abbas has convened a urgent meeting of his top leadership in response to the news.

The official Palestinian news agency now says the Palestinian ambassador to the United Arab Emirates is being recalled.

Netanyahu also said in the broadcast there was “no change” to his plans to annex parts of the West Bank but added they were on “temporary hold” and that implementing annexation would be done with US coordination.

Read the article by Jon Gambrell, Matthew Lee and Josef Federman in The Cessnock Advertiser.