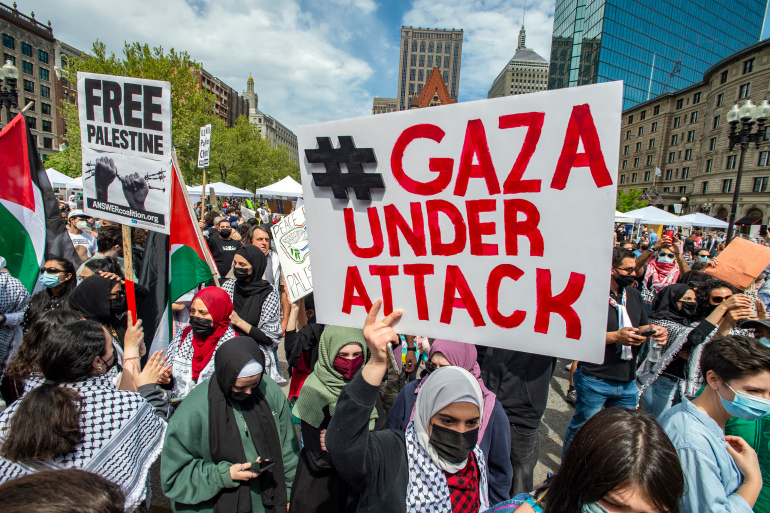 Demonstrators hold signs as thousands gather during a rally to support Palestine at Copley Square in Boston, Massachusetts on May 15, 2021. - Speakers called for an end of international and US funding of Isreal's military. US President Joe Biden, in a phone call with Israeli Prime Minister Benjamin Netanyahu, expressed his "grave concern" Saturday over the flareup of violence in Israel and Gaza, the White House announced. (Photo by Joseph Prezioso / AFP)

As the latest war between Hamas and Israel enters its second week, the narrative is following a familiar script. Hamas fires rockets at Israeli cities, Israel retaliates by bombing the source of the rockets in Gaza, Hamas plays up the civilian casualties, and the world leans on Israel to stop defending itself.

Let’s hope this isn’t the trap the Biden Administration falls into as the fighting continues. So far the White House has supported Israel’s right to self-defence. But the weekend bombing of a building in Gaza that housed media offices, including reporters from the Associated Press and Al Jazeera, has led to cries of outrage and an admonition from the State Department to Israel about protecting journalists in combat zones.

But who’s really endangering the journalists? Israel’s government says the multistorey building was also used by Hamas for intelligence purposes. AP says it had no knowledge of this, but this wasn’t the National Press Club in Washington, D.C. Using civilians and journalists as shields is a common Hamas tactic, and Hamas isn’t likely to have shared its plans with Western journalists.

Israel also warned the journalists and others in the building to clear out an hour before the attack. They did and there are no reports of casualties. This also let Hamas’s militants escape, but it shows how far Israel has gone in this conflict to avoid killing civilians. Inevitably there will be mistakes in war, and civilians will die, but it’s remarkable how discriminating Israel’s targeting has been.

Read the article from the Wall Street Journal Board in The Australian.