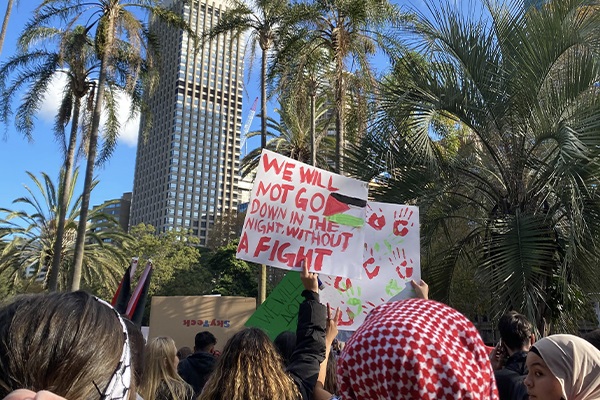 Following the thousands-strong protest in Sydney’s Town Hall last Saturday, thousands gathered in Hyde Park today to protest in solidarity with Palestinians calling for an end to the occupation, blockade and apartheid in Palestine.

A ceasefire between Hamas and Israel was announced in the early hours of yesterday morning. Israel’s devastating military assault on Gaza killed over 240 Palestinians. Since then, Israel has continued its incursions into the Al-Aqsa compound in occupied Jerusalem, attacking Palestinians expressing solidarity with Gaza and residents in Sheikh Jarrah with tear gas and stun guns.

The rally kicked off with an Acknowledgement of Country, linking the struggle against apartheid in Palestine with the Indigenous struggle against colonialism in Australia, followed by chants of “Always was, always will be Aboriginal land.”

“We come here in defiance and to stand and recognise the people of Palestine,” said NSW Greens Member of Parliament Jenny Leong as she began her speech.

“As an Australian living on stolen land, I feel a great sense of disappointment. I am appalled by the complicity of our government and our media in Israel’s continued ethnic cleansing of the Palestinian people.”