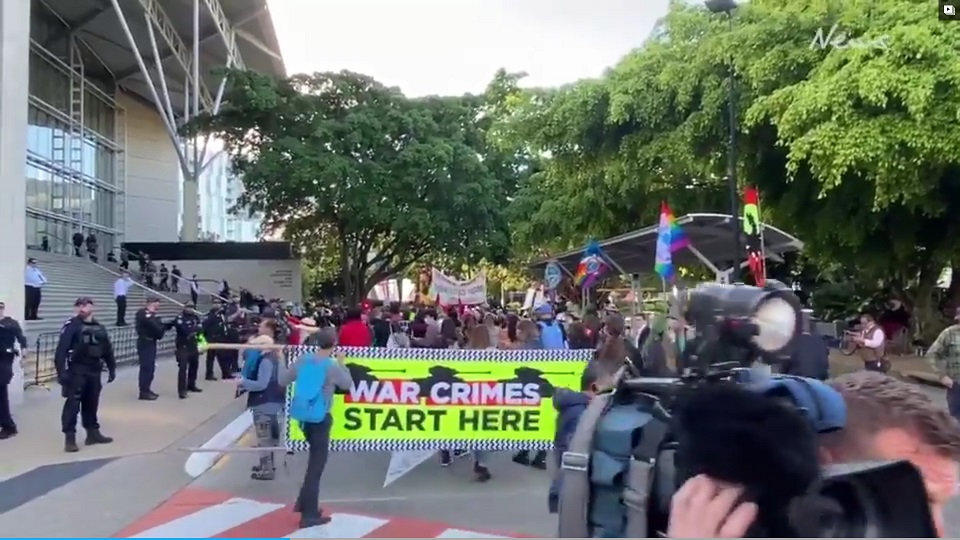 A video from a Brisbane anti-war protest shows a man being pinned down by the neck during a scuffle with several police officers.

Queensland police were seen pinning a man to the ground by the neck in scuffles connected to an anti-war protest in Brisbane on Tuesday morning.

The protesters showed up in opposition to the Land Forces exposition which was billed as the region’s “premier international land defence exposition, showcasing equipment, technology and services for the armies of Australia and the Indo-Asia-Pacific”.

There was a heavy police presence at the scene, with officers lined up at the steps of the Brisbane Convention and Exhibition Centre and a few dozen protesters making noise and holding banners.

Protesters splattered fake blood on the steps outside, with some holding signs reading “End the arms race” while others beat drums, played loud instruments and chanted “Nazi scum, off our streets”.

Police using excessive force at the protest against weapons expo in Bne this morning. Tackled this person from behind, pulled down their pants, hit them.

1 slapped my phone from my hands when they saw me filming their face, another appears to take off their badge. pic.twitter.com/KNqeAw5YUP

Read the report by Rachael Rosel, Ellen Ransley and Anton Nilsson in The Courier Mail.