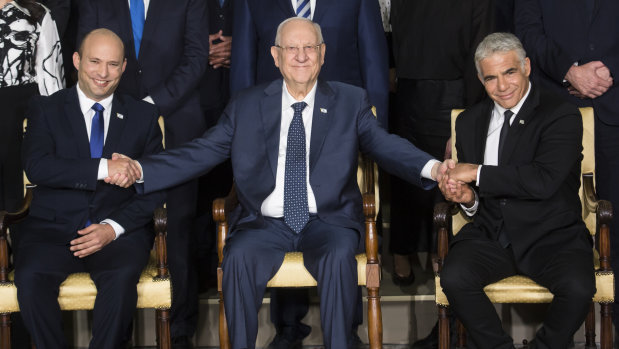 Israel’s new government is more stable than it looks

Opposition to Netanyahu was the primary catalyst in forming the country’s unprecedented new coalition government, and it may well be the strongest glue holding it together.

If bookies in Las Vegas were laying bets on a long duration for the newly formed Israeli coalition government, the odds would be long.

Eight parties—spanning the right, centre, and left and with the participation of an Islamist conservative Arab party for the first time ever—have come together to unseat the government led by outgoing Israeli prime minister Benjamin Netanyahu. The enterprise, which will face a determined Netanyahu leading Israel’s largest and most coherent opposition party, has all the appearances of living on borrowed time. That the confidence vote in the Knesset, which triggered the coalition’s formation, was decided by one vote – 60 to 59 – likewise doesn’t inspire.

And take your pick of potential coalition-wrecking crises: a fight over the budget; defections from incoming Israeli Prime Minister Naftali Bennett’s hard-line, pro-settlement party; moves by Hamas or Israeli extremists to test the new government; and a bloody conflict with Palestinians that forces Mansour Abbas and his four-seat Islamist party, the United Arab List, out of the coalition. And even if the coalition somehow manages to survive, it would be a paralytic mess of opposing ideologies and interests certain to change nothing at all, right?

Read the article by Aaron David Miller in the Financial Review (from Foreign Policy).