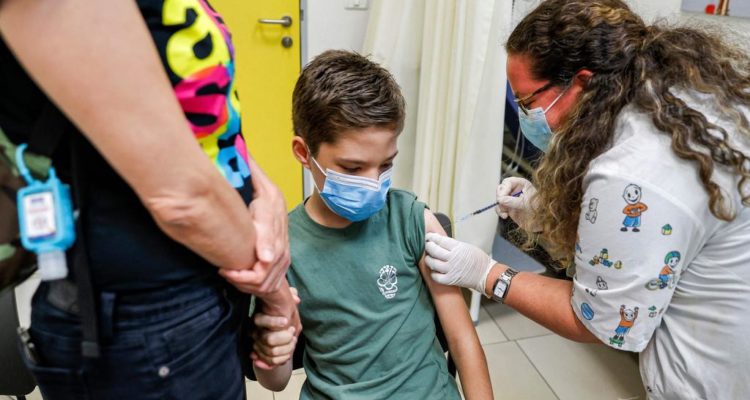 A boy receives a dose of the Pfizer/BioNTech Covid-19 vaccine at the Clalit Healthcare Services in the Israeli city of Holon on June 21. (Jack Guez/AFP)

The world’s most vaccinated country had returned to life as normal, but Covid-19 has arrived again with a terrifying new trend.

The most vaccinated country in the world is experiencing a new spike in coronavirus cases thanks to the fastest spreading variant detected so far.

Israel on Monday recorded 125 new cases of Covid-19, a figure that represents the single highest 24-hour period since April.

A deeper look at the numbers also reveals that about 70 per cent of the new infections are linked to the Delta variant which originated in India and has been spreading globally.

More than half of Monday’s new infections were in children as clusters emerge in schools and authorities prompt parents to vaccinate their children if they are between 12 and 15 years old. Health ministry figures show that young people aged between 10 and 19 have been most affected by new cases in the last month.

Of additional concern is the fact that one-third of Monday’s new infections were recorded among Israel’s vaccinated population.

More than 55 per cent of Israel’s population – some 5.2 million people – have received both doses of the coronavirus vaccine.

Prime Minister Naftali Bennett described Monday’s spike in cases as a “new outbreak” before linking it to travellers who arrived in Israel from abroad.

“Our goal is to end it, to take a bucket of water and pour it on the fire when the fire is still small,” he told reporters during an announcement to extend testing facilities.

Read the article by Rohan Smith in The Advertiser.