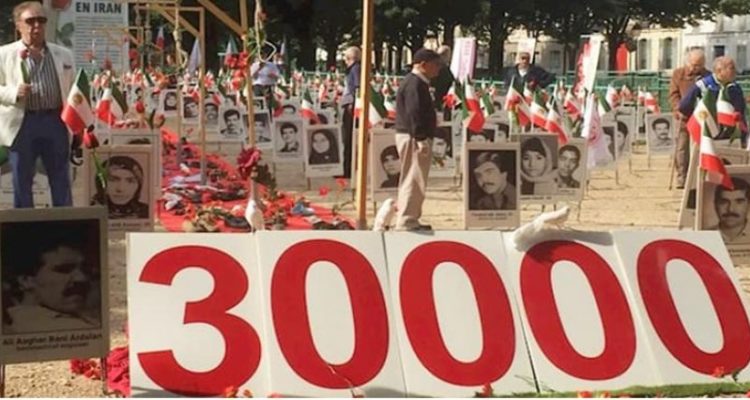 An outdoor display honouring the victims of the 1988 massacre.

Members of the Iranian-Australian community are writing to the Australian Minister for Foreign Affairs, Marise Payne, calling on the government to support their struggle for justice for more than 30,000 victims of the massacre of Iranian political prisoners, which took place from July to September 1988.

Ahrooa, a 19-year-old man from Melbourne, writes: “My mother was only 14 years old and my father was only 15 years old when they were put in prison in harsh conditions and for a long time.”

Molki, an 85 year-old mother from Sydney, writes: “This is an international call for justice by the ‘Iranian Mothers’ who have been suffering at the hands of mullah’s dictatorial regime for the last 43 years.”

Sadollah, 56 years old and now living in Adelaide — and a political prisoner in 1988 — writes: “I was only 16-years old and a member of Iran’s National Youth Wrestling Team before being arrested by the Iranian Revolutionary Guard Corps on a charge of supporting the People’s Mojahedin Organisation in Iran.

“I was detained in Tehran in August 1981 and freed in November 1993, after serving 12 years in prison. In the prisons where I was confined, I personally witnessed many of my friends being ruthlessly executed.”

After their arrests, tens of thousands of political prisoners were asked three simple questions by a three-person kangaroo court: First, “Why were you arrested?” If the answer was “Mojahed”, they were executed; secondly, “Are you ready to deny the Mojahedin?” If the answer was “No”, they were executed; and lastly, “Are you willing to cooperate with us?” If they answered “No”, execution.

Read the article by Mohammad Sadeghpour, president of the Association to Defend Freedom and Human Rights in Iran – Australia in Green Left.