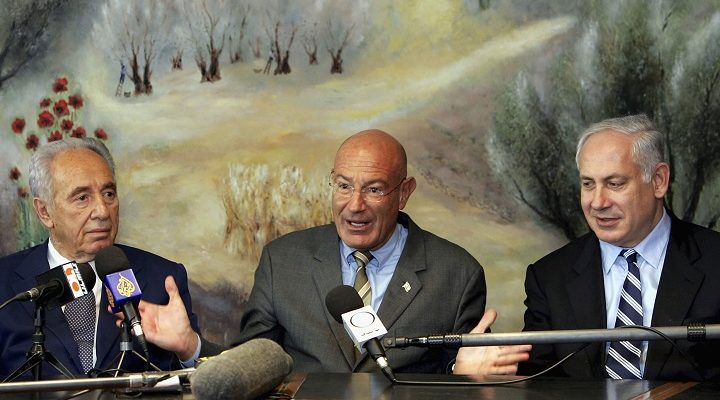 Arnon Milchan, centre, with Israeli deputy prime minister Shimon Peres, left, and finance minister Benjamin Netanyahu in 2005 at the official announcement of Milchan’s donation of $US100 million to help fund a new university. At the time it was the largest donation by an individual for a project in the country. (Getty)

Murdoch, Packer and the Hollywood spy

It was the day after Christmas and New York magazine was trumpeting the latest property triumph by Rupert Murdoch’s heirs. Lachlan and Sarah Murdoch, who had just flipped their Nolita loft to an “Israeli producer” for twice what they paid for it four years before.

“That’s a sick price!” a property broker told the magazine, as the junior Murdochs walked away with a $US4 million profit. But details of the 2003 deal quickly blurred, beginning with who was the new owner.

Ten years later, another high-profile Australian, James Packer, made a real estate purchase of note. This time it was a $2 million beach house in Israel, next door to then-prime minister Benjamin “Bibi” Netanyahu.

Until the investigation into the millions of documents that comprise the Pandora Papers, the two events appeared unconnected. But, as is often the case in such document dumps, a handful of documents uncovered a link between the Australian media scions and an Israeli arms dealer turned film producer.

The buyer of the Murdoch apartment, it can now be revealed, was Arnon Milchan, a legend in Hollywood for the successes of his New Regency films, which won back-to-back Oscars for best picture for 12 Years A Slave (2014) and Birdman (2015).

His purchase of the flat was just one of a string of extravagant gestures he used to cultivate some of the richest and most influential people in the world.

Such largesse helped Milchan build a Svengali-like hold on the affections of Rupert Murdoch. He also charmed Kerry Packer into investing hundreds of millions of dollars in his movie production business (which has co-produced more than 100 films, including Pretty Woman, Fight Club, The Revenant and Bohemian Rhapsody).

Read the article by Neil Chenoweth in the Financial Review.