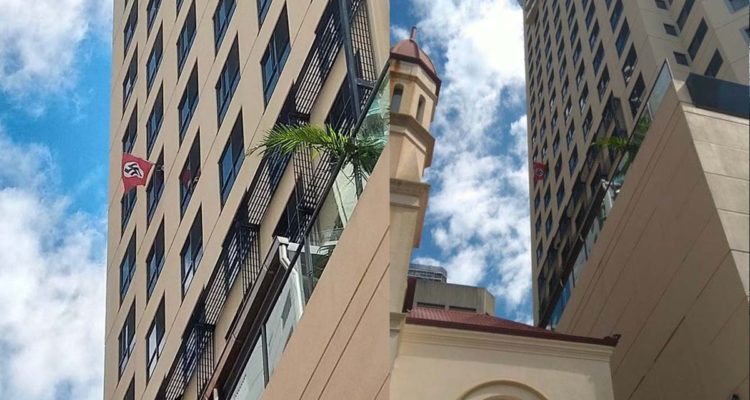 WTF: It’s 2021 And Someone Srsly Just Flew A Nazi Flag Above A Fkn Synagogue In Brisbane

Some absolutely deranged flog flew a Nazi flag above a synagogue in Brisbane today, and I hope they eat dry sharp rocks for breakfast for the rest of the year.

According to Queensland Jewish Board of Deputies Vice President Jason Steinberg, via the AAP, members of a Brisbane synagogue witnessed a swastika symbol hanging from a nearby UniLodge apartment building on Margaret St in the Brissie CBD this morning.

In photos shared by Brisbane’s Lord Mayor Adrian Schrinner, you can see the flag is directly facing the synagogue next door.

The awful incident comes less than a fortnight before the 83rd anniversary of the Night of Broken Glass. On the 9th of November in 1938, organised groups of Nazis across Germany, Austria, and parts of Czechoslovakia took to the streets in anti-semitic violent demonstrations, burning down synagogues and destroying Jewish-owned businesses. It’s a very ugly chapter of modern European history.

“That flag and that symbol, the Nazi swastika symbol, represents one of the most evil moments in human history,” Steinberg said.

“For that to appear in 2021 in Brisbane over a synagogue is just atrocious.”

Queensland Police officers visited the apartment before confiscating the flag and issuing the individual responsible a notice to appear for public nuisance. However, it’s worth mentioning that, as of publishing, there’s no law in Queensland or most states that explicitly outlaw the public display of Nazi symbols.