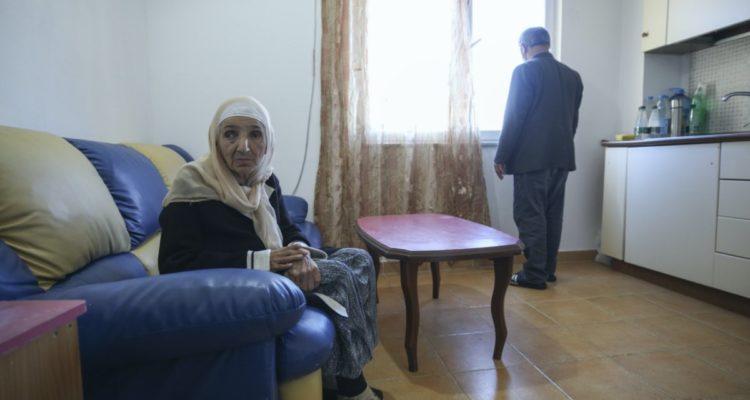 Tova Moradi, 83, an Afghan Jewish woman who fled Kabul this month with relatives with the assistance of an Israeli aid group, speaks to the Associated Press at a resort which is accommodated Afghan refugees in Albania. (AP /Franc Zhurda)

For years, Zebulon Simentov branded himself as the “last Jew of Afghanistan,” the sole remnant of a centuries-old community. He charged reporters for interviews and held court in Kabul’s only remaining synagogue. He left the country last month for Istanbul after the Taliban seized power.

Now it appears he was not the last one.

Simentov’s distant cousin, Tova Moradi, was born and raised in Kabul and lived there until last week, more than a month after Simentov departed in September. Fearing for their safety, Moradi, her children and nearly two dozen grandchildren fled the country in recent weeks in an escape orchestrated by an Israeli aid group, activists and prominent Jewish philanthropists.

“I loved my country, loved it very much, but had to leave because my children were in danger,” Moradi told The Associated Press from her modest quarters in the Albanian town of Golem, whose beachside resorts have been converted to makeshift homes for some 2,000 Afghan refugees.

Moradi, 83, was one of 10 children born to a Jewish family in Kabul. At age 16, she ran away from home and married a Muslim man. She never converted to Islam, maintained some Jewish traditions, and it was no secret in her neighbourhood that she was Jewish.

“She never denied her Judaism, she just got married in order to save her life as you cannot be safe as a young girl in Afghanistan,” Moradi’s daughter, Khorshid, told the AP from her home in Canada, where she and three of her siblings moved after the Taliban first seized power in Afghanistan in the 1990s.

Despite friction over her decision to marry outside the faith, Moradi said she stayed in touch with some of her family over the years. Her parents and siblings fled Afghanistan in the 1960s and 1980s. Her parents are buried at Jerusalem’s Har Menuhot cemetery, and many of her surviving siblings and their descendants live in Israel.