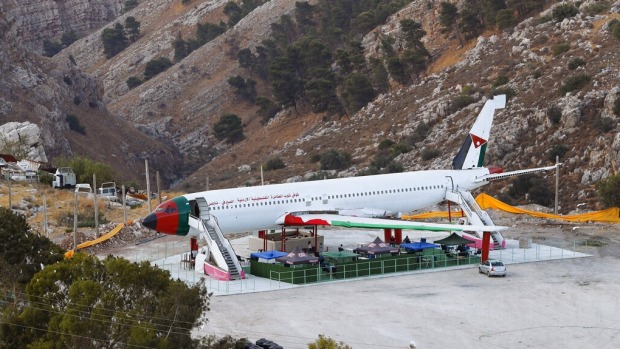 A Boeing 707 aircraft has been converted to a cafe, in Wadi Al-Badhan, just outside the West Bank city of Nablus. (Majd M0hammed/AP)

Palestine converted Boeing plane restaurant: In a place with no airport, grounded plane is the only way to experience air travel

It took two decades, cost $100,000 and was nearly scuppered by the outbreak of war.

But the dream of two Palestinian brothers is finally ready for take-off, as they open a patriotic restaurant in a converted Boeing jet on top of a mountain.

Ata and Khamis al-Sairafi, both 60, bought the decommissioned aeroplane in 1998 and will open the venue in the spring with a grand ceremony featuring costumed flight attendants.

It is not the first time a plane has been converted into a restaurant, with similar themed restaurants opening in Costa Rica, Colorado and even Bolton in the UK.

But this remote venue has a political twist: it is a symbol of the Palestinians’ hopes of living in an independent state.

The West Bank, which the Palestinians claim as their own land, has no airport, while their freedom of movement is controlled by the Israeli military.

For many visiting the restaurant, it will be their only opportunity to step on board a commercial aircraft.

One of the last remaining Palestinian airports, Yasser Arafat International in the Gaza Strip, closed in 2000 during the Second Intifada, the Palestinian uprising against Israel.

Israel bombed its radar station and bulldozed the runway over the following two years.

Read the article by James Rothwell in Traveller.