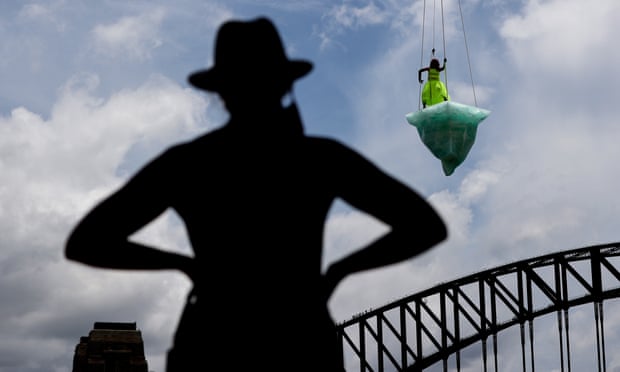 ‘That Palestinians are being forced to explain and restate the basis of the boycott call, only to be ignored and misrepresented is a form of censorship itself.’ (Brendon Thorne/EPA)

In early December 2021, Palestinians and Arabs representing a diversity of creative, activist and academic practice approached the board of Sydney festival after it was revealed the board had accepted $20,000 funding from the Israeli embassy for the presentation of Sydney Dance Company’s realisation of Decadance, a work created by Israeli choreographer Ohad Naharin of the Batsheva Dance Company of Tel Aviv. The amount gave the embassy “star partnership” status with Sydney Festival.

We made three requests: divest from the star partnership, end all relations with the State of Israel, and remove any Israeli government emblem from Sydney festival’s promotional material.

In arguing our case for divestment, we said Arab and Palestinian communities would not participate in a festival that does business with a state that stands credibly accused of war crimes and crimes against humanity, according to crimes defined in the Rome Statute of the International Criminal Court. In 2021, Human Rights Watch found Israel is committing “crimes against humanity of apartheid and persecution”.

We made it clear artists and arts organisations – fundamental partners in any arts festival – felt betrayed by Sydney festival. Finally, we pointed out this partnership denied artists an environment of cultural safety, leaving artists, creatives and companies with no choice but to withdraw.

Our arguments were rejected by the board on the grounds Sydney festival is a “non-political organisation”. In response, Palestinians and a cross-section of artists, arts organisations and communities publicly called for a boycott of the Sydney festival, inspired and guided by the global Palestinian Boycott, Divestment and Sanctions (BDS) movement, founded and led by Palestinian civil society.

Read the article by Randa Abdel-Fattah in The Guardian.