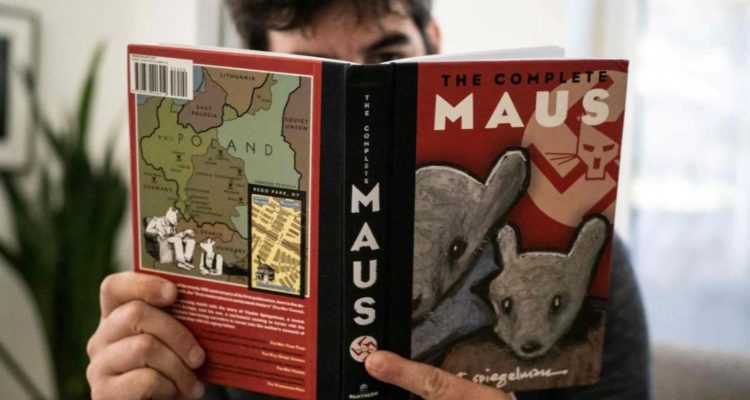 Taking a peak at the book in Los Angeles on Thursday. (AFP)

US school board bans Holocaust novel for ‘crude’ language

A school board in Tennessee has added to a surge in book bans by conservatives with an order to remove the award-winning 1986 graphic novel on the Holocaust, Maus, from local student libraries.

Author Art Spiegelman told CNN on Thursday – coincidentally International Holocaust Remembrance Day – that the ban of his book for crude language was “myopic” and represents a “bigger and stupider” problem than any with his specific work.

The ban, decided by the McMinn County Board of Education in eastern Tennessee on January 10, was the most recent controversy over conservatives seeking to purge school libraries of books they find objectionable.

Their focus has been on works that offer alternatives to traditional views of US history and culture, particularly from the viewpoints of African-Americans and LGBTI youths.

Maus was highly acclaimed when it was published as a compilation of Spiegelman’s serialised tale of the experiences of his father, a Polish Jew, with the Nazis and in a concentration camp.

The book, which depicted characters in the story as animals – Jews are mice and Germans are cats – won a Pulitzer Prize and was accepted in many secondary schools as a powerful and accurate depiction of the Nazi murder of millions of Jews during World War II.

The ban by the McMinn County school authority, though, focused on the use of eight crude words such as “damn” and “bitch”, and one scene of nudity, which some parents said were inappropriate for schoolchildren.

“There is some rough, objectionable language in this book,” said school board director Lee Parkison, who proposed just redacting those parts of the book.

Read the article by Cyril Julien in The Australian.