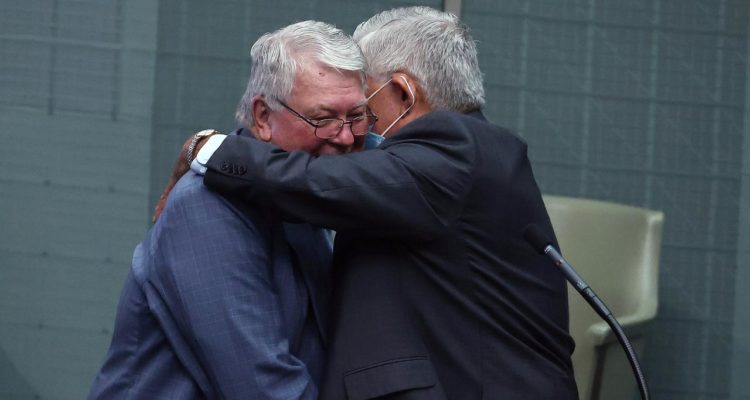 Ken O'Dowd was congratulated by Ken Wyatt in the House of Representatives in Parliament House after his speech. (NCA Newswire/Gary Ramage)

Retiring Queensland Coalition MP Ken O’Dowd has used his last speech to call for peace between Israel and Palestine.

A Queensland Coalition MP has used his retirement speech to call for peace between Israel and Palestine.

Flynn MP Ken O’Dowd, who is retiring as the member for Flynn after 12 years of service, in an unorthodox move also paid tribute to the Palestinian Ambassador to Australia Izzat Salah Abdulhadi.

Mr O’Dowd’s retirement has set up a significant electoral battle for the Gladstone-based seat of Flynn, which is geographically nearly twice the size of Tasmania.

The former small businessman came into parliament in 2010 after snatching the seat from single-term Labor MP Chris “CT” Trevor.

Mr O’Dowd’s public views on a number of issues during his time in parliament has gone against the grain of Coalition policy.

This more prominently included his belief that the high-profile Biloela asylum seeker family — the Murugappan’s — be allowed to settle in Australia.

Mr O’Dowd has also previously described the plight faced by the people of Palestine as a form of “apartheid”.

In his valedictory speech Mr O’Dowd said he “hoped a solution can be found very soon” between Israel and Palestine.

“Peace between these two nations is paramount for the whole region,” he said.

Read the article by Madura McCormack in The Courier-Mail.