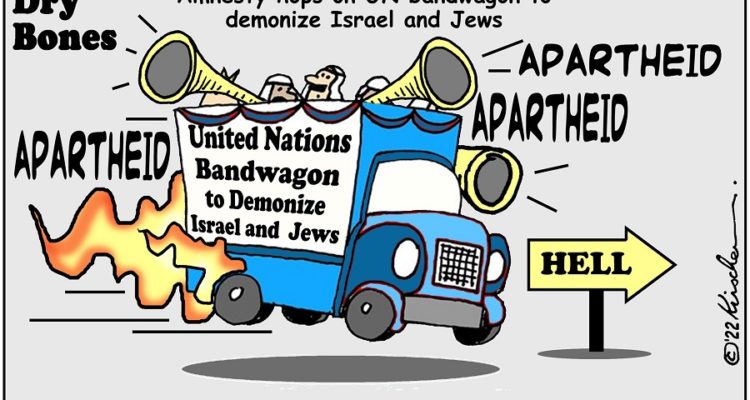 Amnesty hops on UN bandwagon to demonize Israel and Jews

Jordan – in fact – exercises effective control over 78% of the territory of British mandate Palestine. The Arab residents of former Palestine attained their right to self-determination there when Britain granted it independence in 1946. Not one Jew lives there. Selling land to Jews is punishable by death.

The Jews were left to exercise their right of self-determination in the remaining 22% of the territory of British mandate Palestine.

Since 1967 the PLO has demanded an additional areafrom this Jewish-reserved 22% – known as Judea and Samaria (West Bank), East Jerusalem and Gaza – to create a second Arab state in former Palestine – in addition to Jordan.

Every Jew living in these areas had been expelled in 1947 after Jordan and Egypt conquered and occupied these territories.

Arabs living in Judea and Samaria (West Bank) and East Jerusalem were Jordanian citizens between 1950 and 1988.

The UN has falsely alleged that Jews have no right to live in Judea and Samaria (West Bank), East Jerusalem and Gaza and where so doing now – are acting illegally in flagrant violation of international law and are the major obstacle to peace

Articles 6 and 25 of the Mandate encourages close Jewish settlement in these areas and rebuts such claims. This internationally- sanctioned right of Jewish settlement still exists today by virtue of Article 80 of the UN Charter.

Amnesty International has acted with deliberate malice and put at extreme risk the lives and well being of Jews – and innocent bystanders – worldwide.

The UN-Amnesty International bandwagon is on a journey to hell as a result of their dishonest machinations against the Jewish People.

Read the article by David Singer in Online Opinion.