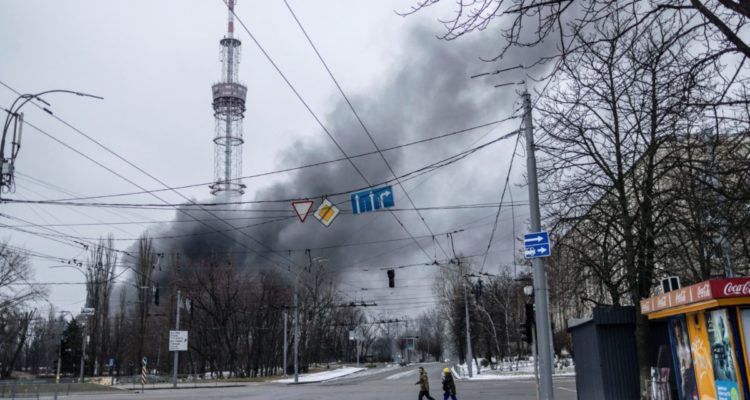 Smoke billows from the TV tower, amid Russia's invasion of Ukraine, in Kiev. (Reuters/Carlos Barria)

A strike near Babyn Yar; but this time Ukraine’s views on Jews has changed

As soon as a projectile hit Kyiv’s main radio and television tower, a short walk from the Babyn Yar Holocaust Memorial Center nearby, on Tuesday, Jews worldwide reflexively shuddered.

It’s unclear if the Russians targeted the memorial centre. More likely, they were interested in knocking Kyiv’s television stations off the air. Five people were killed in the strike.

But the proximity to the site where 33,771 of the city’s Jews were systematically shot dead by machine-gun fire in a two-day killing spree in 1941 is traumatic. Israel’s Yad Vashem Memorial issued a statement condemning the attack. So did the United States Holocaust Memorial Museum and the American Jewish Committee.

For many Jews, Ukraine brings up memories of pogroms, antisemitism and Nazi collaboration. Between 1.2 million and 1.6 million Jews were killed in Ukraine during the Holocaust. But Jewish life in Ukraine is no longer what it was — neither under the Nazis nor the Soviet Union.

And incredibly enough, in 2019 Ukraine elected a Jewish president, Volodymyr Zelenskyy, by a landslide – 73 per cent of the vote.

Though he is not a religious Jew, Zelenskyy has never shied from professing his Jewish identity. Some of his family members were executed by the Nazis, including three great-uncles.

On Tuesday, he tweeted forcefully after the strike: “what is the point of saying ‘never again’ for 80 years, if the world stays silent when a bomb drops on the same site of Babyn Yar?”

Despite efforts to suppress the memory of Babyn Yar during the Soviet years, Ukraine has conducted Babyn Yar commemorations on a regular basis since it became independent in 1991, recognizing that under the auspices of the Nazi regime and its collaborators, tens of thousands of Jews and others, including Roma, were executed.