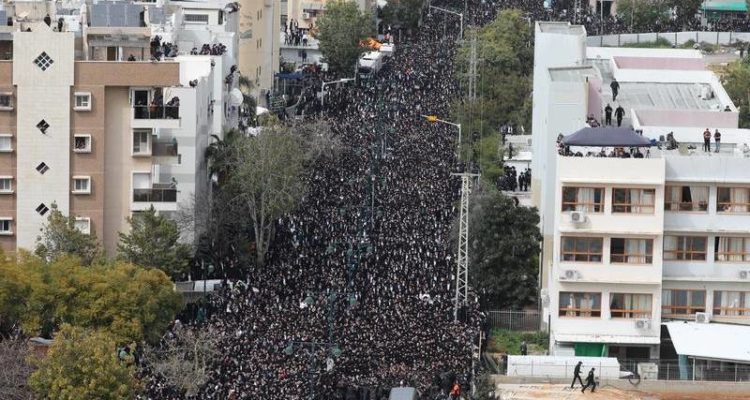 Some 350,000 mourners gather for funeral of prominent ultra-Orthodox rabbi.

Hundreds of thousands of people have attended the funeral of a prominent ultra-Orthodox rabbi in a city in central Israel.

Rabbi Chaim Kanievsky, 94, one of the most influential scholars in the country’s religious community, died on Friday.

One of few remaining leaders of the ultra-Orthodox community in Israel born before the Holocaust, Kanievsky was revered by many in the Jewish religious world.

The rabbi was laid to rest at Bnei Brak, the predominantly ultra-Orthodox city near Tel Aviv where he lived. Israeli media estimated that more than 350,000 people attended the funeral procession from his home to a nearby cemetery.

Police closed several roads in the densely populated Tel Aviv area for several hours, while other main routes were expected to be gridlocked.

The insular ultra-Orthodox community makes up about 12 per cent of Israel’s 9.4 million people. They adhere to a stringent interpretation of Judaism, with a focus on Torah study and observance of tradition. Prominent rabbis such as Kanievsky play a significant role in community life.