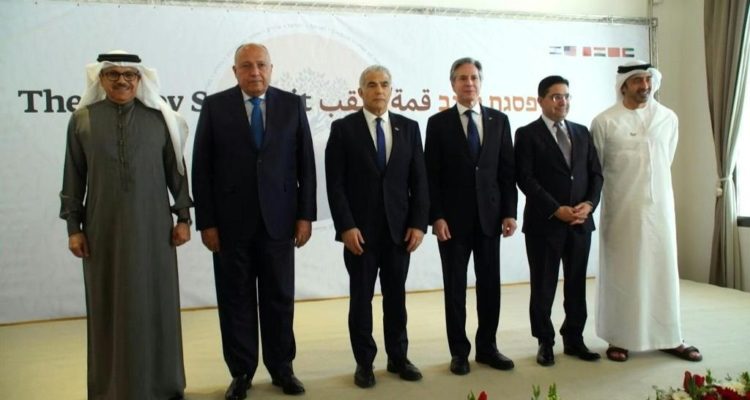 US Secretary of State Antony Blinken and the top diplomats of Israel and four Arab states hold a landmark meeting to discuss issues from the Iran nuclear negotiations to the global shockwaves of Russia's invasion of Ukraine.

US Secretary of State Antony Blinken, left, jogs at Sde Boker in the southern Negev desert in the morning on March 28, 2022

US Secretary of State Antony Blinken and the top diplomats of Israel and four Arab states wrapped up a landmark meeting Monday vowing to boost cooperation, which Israel said would send a strong message to its arch foe Iran.

The talks brought together for the first time on Israeli soil the foreign ministers of the United Arab Emirates, Bahrain and Morocco — which all normalised ties with the Jewish state in 2020 — and of Egypt, a country formally at peace with Israel since 1979.

“They certainly have something to fear,” he said about Iran, a country Israel is fighting in a regional shadow war and which it accuses of seeking a nuclear bomb, a goal the Islamic republic denies pursuing.

Blinken departed Israel and arrived on Monday evening in Morocco, where he will meet senior officials from the North African kingdom, as well as the UAE’s de facto leader, Abu Dhabi Crown Prince Mohammed bin Zayed.

Blinken’s visit to Morocco, followed by Algeria on Wednesday, is expected to focus in part on the threat from IS and Al-Qaeda affiliates in the Sahel region, alongside wheat supply shortages stemming from the war in Ukraine.

The talks on reviving the 2015 Iran nuclear deal were high on the agenda at the Negev gathering and in Blinken’s meetings with Israeli officials.