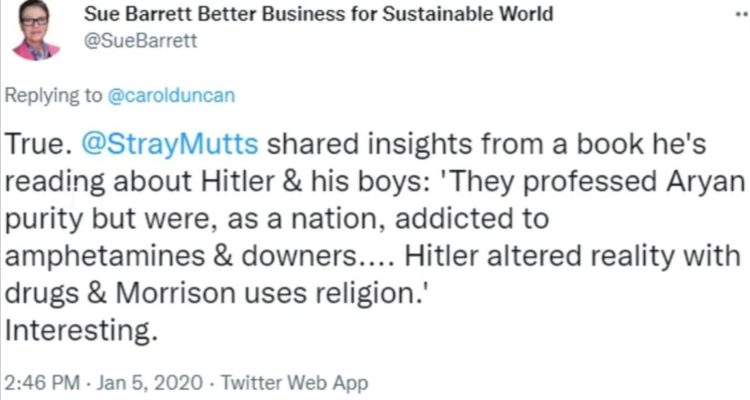 One of the tweets by Independent Candidate for Goldstein Zoe Daniel's top campaign adviser Sue Barrett.

Senior campaign operatives for independent Zoe Daniel have publicly called for Jewish advocacy groups to “shut up” and have compared Scott Morrison with Adolf Hitler.

Ms Daniel’s campaign manager Sue Barrett sent the inflammatory tweet about the Prime Minister in 2020 while her husband, Jobst Schmalenbach, who is operations manager in the Victorian seat of Goldstein where Ms Daniel is challenging Liberal MP Tim Wilson, made offensive remarks about Jewish organisations and Israel between 2019 and last year.

The Australian has this week shone a spotlight on the views of independent candidates running in traditionally Liberal seats with the largest Jewish populations in the country.

A key figure behind independent Allegra Spender’s tilt for the Sydney seat of Wentworth, Blair Palese, has criticised the Australian government for its “shocking support of Israel in killing unarmed children and civilians”, while former ABC journalist Ms Daniel signed an open letter in 2021 accusing Israel of unleashing a “brutal war against the ­besieged population of Gaza”.

Ms Daniel – who is standing by her campaign team – also claimed in an ABC article that US president Donald Trump had sabotaged his pledge to broker peace in the Middle East by ­moving the US embassy to Jerusalem, and that in doing so he was “satisfying his wealthy Jewish ­donors”.

Liberal senator for Victoria and chair of the joint parliamentary intelligence and security committee James Paterson said: “At a time of rising anti-Semitism, it is particularly disappointing and dangerous that Ms Daniel has previously implied that Jewish people use political donations to influence public policy.”