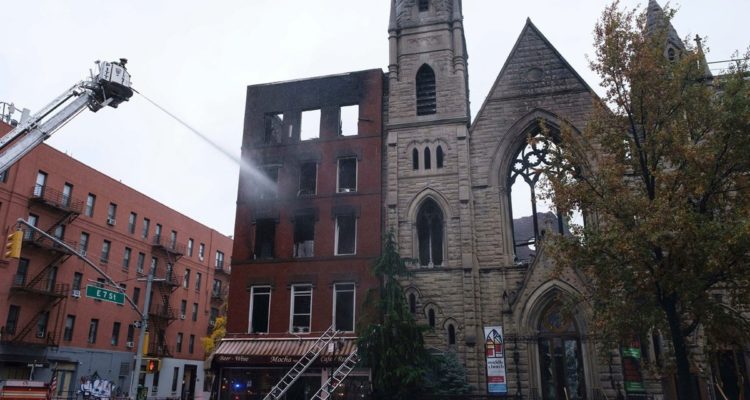 Firefighters work to extinguish a fire that erupted from the building next to Middle Collegiate Church on 5th December, 2020, in New York. (AP Photo/Yuki Iwamura.)

Postcards: Middle Church to begin meeting in synagogue on Easter as it awaits restored building

When Middle Collegiate Church was devastated by fire in December 2020, the rabbi of a Manhattan Reform synagogue 10 short blocks away responded, along with many others.

“I was heartbroken and I reached out to the Rev Dr Jacqui Lewis and I said: Anything you need, we will provide it,” Rabbi Joshua Stanton of East End Temple recalled in a recent interview. “Your loss is felt well beyond your community. Your heartbreak, we share in. And we’re here for you, however possible.”

Lewis remembered those words as she considered the best location for her church’s hybrid worship to continue this spring.

Now, on Easter Sunday, Stanton intends to share a special blessing from his synagogue’s podium as their congregations embark on a one-year pilot relationship the two faith leaders hope will last until Middle Church is rebuilt. Lewis expects that could occur in about three years and said plans will be shared on Easter, a fitting announcement for the day Christians celebrate their belief in Jesus’ resurrection.

The multi-ethnic church met for a few months in late 2020 at the site of an Episcopal parish before a COVID-19 spike put Middle Collegiate back into an all-online mode.

“We had a collegial relationship with East End and it just felt like a revolutionary thing to do, to partner with our Jewish colleagues in this way,” Lewis said in an interview last Wednesday.

Stanton said the synagogue dropped two-thirds of its usual rental price for the arrangement and then a donor paid most of the third that was left. Lewis said that amounts to about $US16,000 for the first year, “so basically it’s a gift”.

“It is an incredible act of generosity and trust to make space in their community for us to tabernacle with them,” she said, noting their worship services being on different weekend days “makes it easier just to share space.”

She and Stanton, who have swapped pulpits in the past, are discussing possible ways to share more than a building, including children’s programs, adult education and a racial justice trip to the South with youth from both congregations.