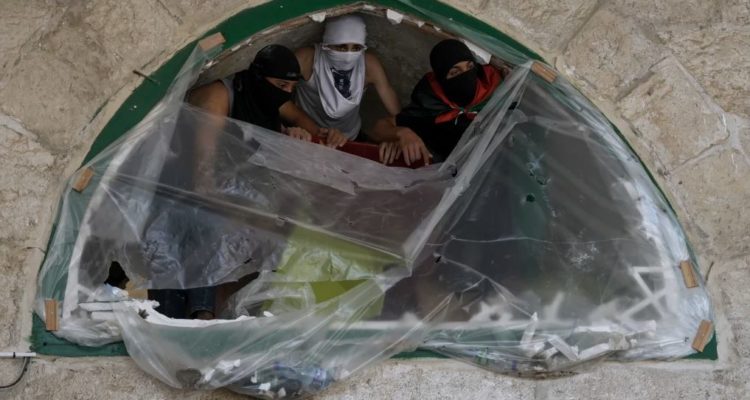 Masked Palestinians take position during a clash with Israeli security forces at the Al-Aqsa Mosque compound in Jerusalem’s Old City on Friday. (AP)

Jerusalem: Israeli security forces entered the Al-Aqsa mosque compound in Jerusalem before dawn on Friday as thousands of Palestinians were gathered for prayers during the holy month of Ramadan, setting off clashes that medics said wounded at least 59 Palestinians.

Israel said its forces entered to remove rocks and stones that had been gathered in anticipation of violence. The holy site, which is sacred to Jews and Muslims, has often been the epicentre of waves of Israeli-Palestinian unrest.

Videos circulating online showed Palestinians hurling rocks and police firing tear gas and stun grenades on the sprawling esplanade surrounding the mosque. Others showed worshippers barricading themselves inside the mosque itself amid what appeared to be clouds of tear gas.

The Palestinian Red Crescent emergency service said it evacuated 59 wounded people to hospitals. The endowment said one of the guards at the site was shot in the eye with a rubber bullet.

“Police were forced to enter the grounds to disperse the crowd and remove the stones and rocks, in order to prevent further violence,” it tweeted.

The police said they waited until prayers were over and the crowds started to disperse. In a statement, it said crowds started hurling rocks in the direction of the Western Wall, a nearby Jewish holy site, forcing them to act. They said they did not enter the mosque itself.

Read the article by Joseph Kraus in The Sydney Morning Herald.