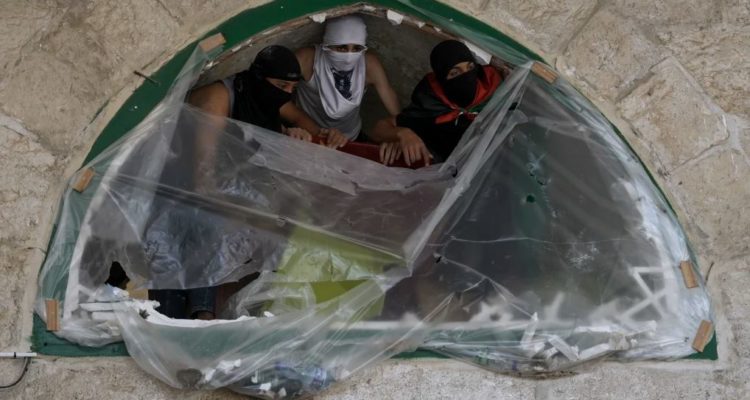 Masked Palestinians take position during a clash with Israeli security forces at the Al-Aqsa Mosque compound in Jerusalem’s Old City on Friday. (AP)

Jerusalem: Palestinians clashed with Israeli police at the Al-Aqsa mosque in Jerusalem on Friday as thousands gathered for prayers during the holy month of Ramadan. Medics said more than 150 Palestinians were wounded in the most serious violence at the site in nearly a year.

The holy site, which is sacred to Jews and Muslims, has often been the epicenter of Israeli-Palestinian unrest, and tensions were already heightened amid a recent wave of violence. Clashes at the site last year helped spark an 11-day war with Hamas militants in the Gaza Strip.

The clashes come at a particularly sensitive time. Ramadan this year coincides with Passover, a major weeklong Jewish holiday beginning Friday at sundown, and Christian holy week, which culminates on Easter Sunday. The holidays are expected to bring tens of thousands of faithful into Jerusalem’s Old City, home to major sites sacred to all three religions.

Hours after the clashes began, the police said they had put an end to the violence and arrested “hundreds” of suspects. The mosque was re-opened, and some 60,000 people attended the main Friday prayers midday, according to the Waqf, the Islamic endowment that administers the site.

After prayers, thousands of Palestinians marched around the esplanade, chanting “with our souls, with our blood, we sacrifice for you, Al-Aqsa,” in addition to slogans in support of Hamas, the Islamic militant group that rules Gaza.

Read the article by Joseph Kraus in WA Today.