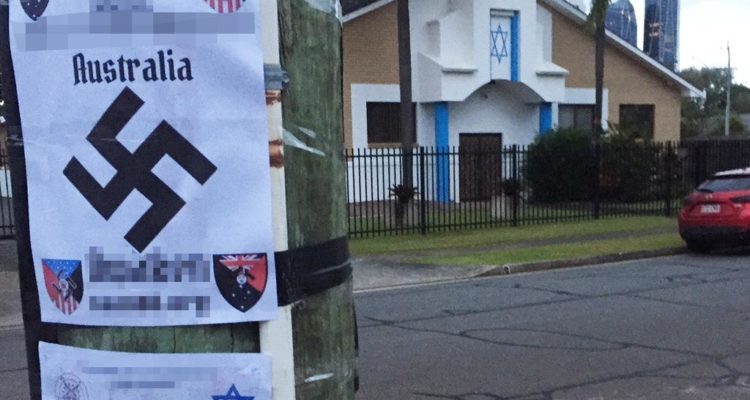 Anti-Semitic flyers taped to a pole outside the Temple Shalom on Isle of Capri on the Gold Coast.

A neo-Nazi group has used photos of several Morrison government members, including the Prime Minister, in flyers distributed across a Gold Coast neighbourhood, sparking outrage in the Jewish community.

The flyers were dropped in letterboxes and stuck to poles outside a synagogue in the Isle of Capri as the Jewish community honoured Holocaust Remembrance Day.

The flyers appear to have been timed for the upcoming federal election, as they included photos and descriptions of Prime Minister Scott Morrison and government ministers among swastikas and anti-Semitic messages.

Brisbane Times has chosen not to detail the content of the flyers.

A Jewish member of the community, who saw the flyers and wished to remain anonymous, said they were now planning to move their family to Israel, as they no longer felt safe in Australia.

“This is how the Holocaust started,” the person said.

“I saw a few others stuck to poles, and laying in the street likely because the homeowners got them out of the letterbox and discarded it.

“It sent a chill down my spine.

“My family are Holocaust survivors. That’s how we came to Australia.

“To make it worse, these people did this flyer drop on Holocaust Remembrance Day … this is like Germany all over again. I personally think they are just jealous of our success in this country.”

Read the article by Cloe Read in the Brisbane Times.