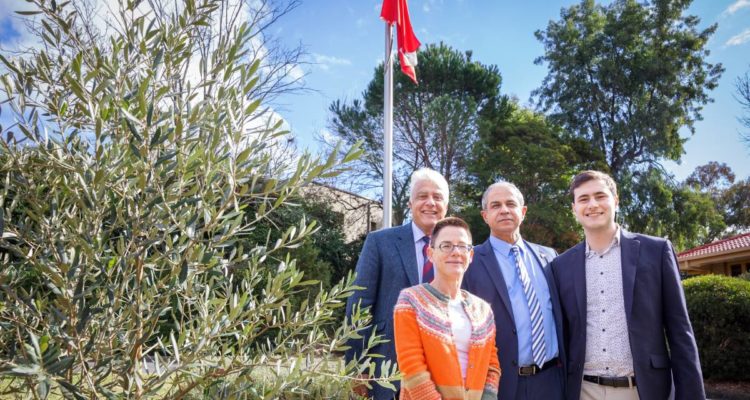 Descendants of Austrian Holocaust survivors and victims were honoured with the planting of a new olive tree in the Forrest embassy, serving as a reminder to address intolerance and racism in society.

Canberra’s diplomatic corps and ACT Attorney-General Shane Rattenbury joined guests and the families of those who escaped the atrocities of World War Two on Friday morning.

Austria introduced a citizenship amendment in 2020 to allow descendants of Austrian victims of National Socialism to regain nationality.

Mr Strohmayer, joined by Israeli ambassador Amir Maimon, spoke of the world’s responsibility to learn from lessons of the past and to stand up against intolerance and racism.

“This ceremony also reminds us, of course, of our individual responsibility, namely to speak up against intolerance, anti-Semitism and all forms of racism,” he said.

“It’s our duty to not only address this jointly, but also as individuals wherever, and whenever, is necessary.”

Two ancestors of Austrians who had escaped the central European country in the lead-up to the world war – and have since been awarded citizenship – were in attendance.

Anna Burger and Edan Schonberger said their older relatives had mixed feelings about the past but both stressed the significance of the historical connection to descendants.

“That connection with our ancestry, and with the realities of what happened to them, is very important,” Anna said.

Read the article by Sarah Basford Canales in The Canberra Times.