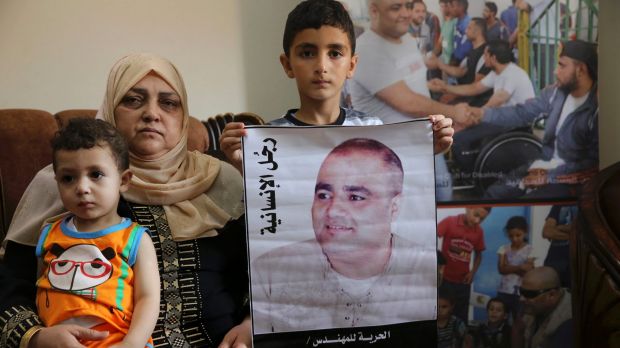 In 2016 Amro el-Halabi holds a picture of his father, Mohammed, who was the Gaza director of the international charity World Vision, now found guilty of diverting sums to Hamas. (AP/Adel Hana)

Beersheba: An Israeli court on Wednesday convicted a Palestinian aid worker who has been detained for six years on Israeli charges that he funnelled tens of millions of dollars in relief funds to the militant group Hamas.

The Beersheba District Court found Mohammed el-Halabi guilty of supporting a terrorist organisation but acquitted him of treason, judges reading out the verdict said. They set a sentencing hearing for July.

Halabi, head of Gaza operations for World Vision, an international Christian aid group, was arrested in June 2016, accused of siphoning off up to $US50 million ($71 million) to pay Hamas fighters, buy arms and fund the group’s activities.

Halabi has denied the charges and refused several plea deal offers. He has told Reuters the charges were “a set of lies” meant to target humanitarian work in Gaza.

World Vision Australia – which says it was funded by the federal government’s Department of Foreign Affairs and Trade to provide services in the region, disputes Israel’s claims, and says audits by DFAT, by World Vision internally, and by an independent company – found no evidence that money or supplies were diverted.

Hamas, which governs blockaded Gaza, is designated by Israel and the West as a terrorist organisation.

Read the article by Henriette Chacar in The Sydney Morning Herald and in Sight Magazine.