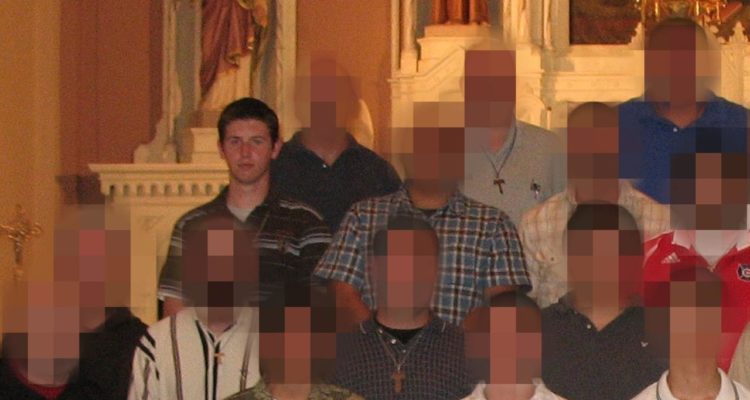 Duncan Robert Cromb, pictured unblurred at the 2008 North American-Pacific Capuchin Conference, is a former Franciscan friar charged with being one of the leaders of SA's neo-nazi group.

A lapsed Catholic friar and his fellow neo-nazi leaders were in possession of a book that has inspired bombings and terrorist acts around the world, a court has heard.

A book in the possession of the state’s alleged neo-nazi leaders – one of whom is a lapsed Catholic friar – has inspired fatal acts of terrorism around the world, a court has heard.

They further allege the group subscribed to, and owned a copy of, the works of infamous US domestic terrorist and white supremacist David Eden Lane.

Prosecutors allege Mr Cromb, Mr Brodie-Hall and Mr Pay kept a printed copy of Lane’s work on a bookshelf behind a Nazi flag.

They further allege Mr Pay carried a digital copy with him on his phone.

Mr Cromb, 37, of Modbury, has yet to plead to multiple counts of possessing a document or record of information to commit a terrorist act.

He, Mr Brodie-Hall and Mr Pay were arrested at their share-house during anti-extremism police raids around the state in April 2021.

Read the article by Sean Fewster in The Advertiser.