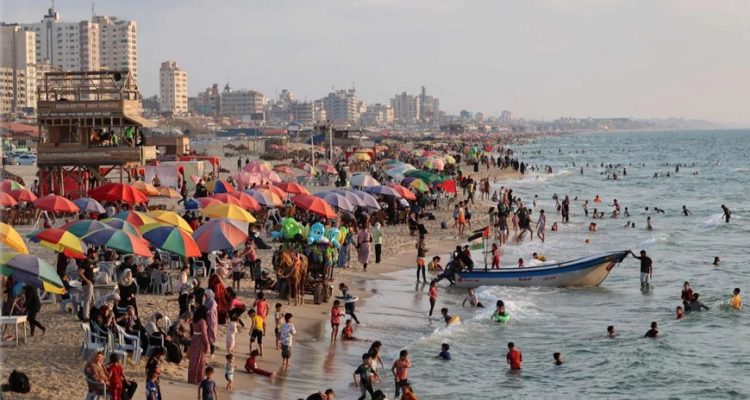 People gather at the beach along the shore of Gaza City on June 13.

Gaza gets the all-clear to go swimming, not drowning

For the first time in more than a decade, the water and the sand off the coast of Gaza are clean and the sea smells of salt rather than sewage. As a result, thousands of Palestinians are flocking to the beach.

It’s different from an Australian beach experience, but no less joyous. Most people swim fully clothed, and in some spots there are horses in the water too.

Cafes and restaurants sit right on the sand, along with family barbecues. The sound of the waves and shouts of laugher mingle with the sizzle of grilling meat.

Parents of young children, such as father of five Fallah Nurtaja, are relieved that untreated effluent is finally being removed from the water. “In the past years the beach was polluted so I did not bring the children because I didn’t want them to get sick,” he says.

“But … here they are swimming in front of us, because the sea is clean, thank God.”

This change is the result of something apparently simple: the construction of three modern waste water treatment plants. An Australian has made a real contribution to this rare good news story from Gaza, the coastal strip, home to two million Palestinians, ruled by the Islamist group Hamas.

“Victory out of the Israel-Gaza conflict is rare, and it’s a really significant victory for the region, but it needs to be built on, so we mustn’t stop here,” says Australian-Israeli environmental campaigner Gidon Bromberg.