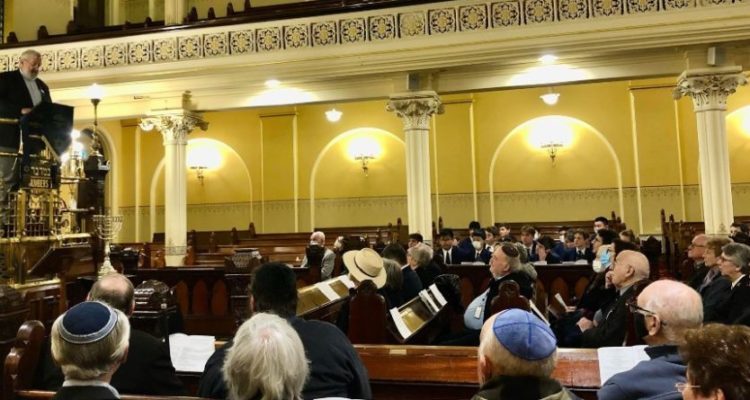 Fr Patrick McInerney SSC, delivers the keynote address at the Annual Shoah Memorial Service in the Great Synagogue on 31 May 2022.

The Church changes over time. Sometimes dramatically, in the public eye; and, more often, in small steps taken in everyday private lives.

Both kinds of ecclesial evolution were evident in a quietly pioneering keynote address delivered by Columban missionary priest, Fr Patrick McInerney, at The Great Synagogue in Sydney on the night of 31 May 2022.

Stepping up to the pulpit for the Annual Shoah Memorial Service hosted by the Council of Christians and Jews of New South Wales, Patrick was acutely aware of speaking from a place that, for the most part, had belonged to the voices of Holocaust survivors and their descendants who had previously shared their stories, memories and reflections at this time-honoured event. As a Catholic priest, what could he offer such a sensitive occasion?

“It was a daunting challenge and a great responsibility,” recalls Patrick. “I chose to approach the task in an autobiographical way. What I shared was a kind of ‘conversion’ story, a journey of growth.”

Patrick’s story began with a description of his early Catholic life. Growing up on a farm in South Australia, in an Anglo-Christian bubble, he knew nothing of Judaism. He went on to become a Columban priest, studying Arabic and Islam in Rome and spending a 20-year appointment in Pakistan, a 96% Muslim-majority country. He was being introduced to the world of interfaith relations, yet at this time Jews and Judaism remained unknown to his life’s path.

“In late 2002 I was appointed to the Columban Centre for Christian-Muslim Relations in Sydney. It was at the Abraham Conference that I first met a Jew – and my long overdue remedial work began.

“I had often attended Friday prayers in mosques – but had never been inside a synagogue. I asked a Jewish friend who kindly invited me to a Shabbat Service. As I sat in the congregation, it struck me that Jesus would have felt ‘at home’ here, whereas I, his follower, felt like a stranger.”

Read the article by Teresa Pirola in Catholic Outlook.