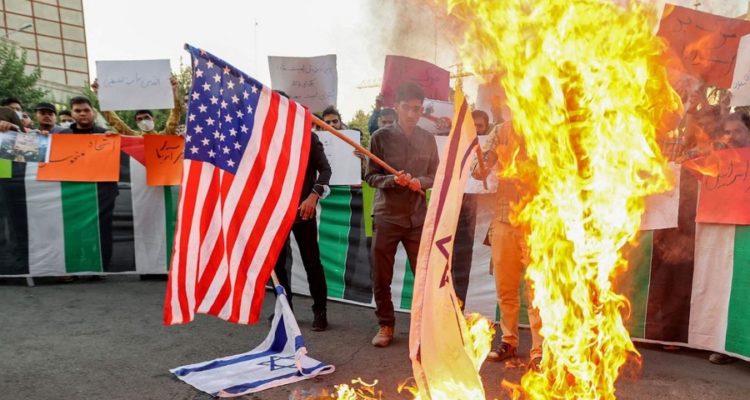 Iranian students from the Islamic hardline Basiji volunteer militia burn US and Israeli flags in Tehran at the weekend. (AFP)

Iran has the technical capacity to build a nuclear weapon but has not taken a decision to do so, an official told the Al Jazeera broadcaster on Sunday.

Iran “has the technical ability to build a nuclear bomb” said Kamal Kharrazi, who heads an advisory board linked to Iran’s leadership, but Tehran has “not made a decision to build an atomic bomb”, he added.

The comments come after US President Joe Biden visited the Middle East this week and signed a security pact with Israel vowing to prevent Iran from acquiring nuclear weapons. It also comes as efforts to revive a 2015 nuclear deal between Tehran and world powers remain stalled.

Mr Kharrazi, a former foreign minister, also told Al Jazeera that Tehran had carried out extensive drills to be able to strike deep inside Israel “if sensitive (Iranian) installations are targeted”.

He did not specify when the drills took place.

The 2015 nuclear deal offered Iran sanctions relief in exchange for imposing limits on its nuclear program and sought to guarantee Tehran could not develop a nuclear weapon, something it has always denied wanting to do.

The US withdrew from the agreement in 2018 under then president Donald Trump and reimposed biting sanctions, prompting Tehran to step away from many of its own commitments under the deal.