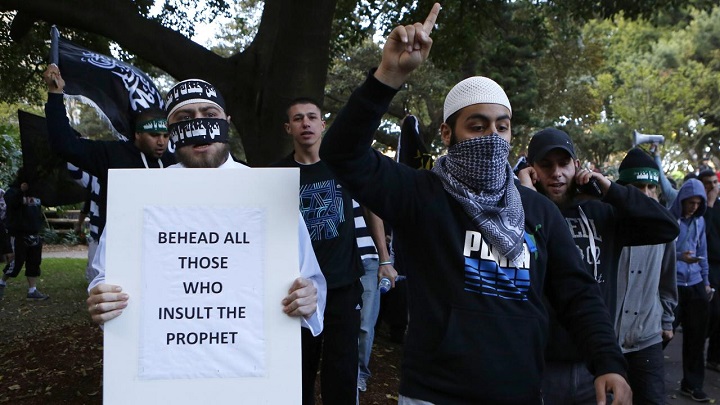 Picture this poster. A Nazi holds a gun to the head of a man on his knees wearing the Star of David. “Legalise the execution of Jews,” it says across the top. “Join your local Nazis,” it says along the bottom.

This poster, which appeared on the school sign outside Maroochydore High School in Queensland last week, incites violence against Jews. The same posters were plastered on walls at Melbourne Grammar School and Melbourne High School in August last year, and they are the work of Antipodean Resistance. The group, which started as a handful of neo-Nazis in Melbourne, has been ramping up its numbers and activities across Australia in recent days and weeks.

The neo-Nazis are trying to recruit schoolchildren. Stickers imploring “white Australian youth” to “Join the Fight” were at Gordon train station on Sydney’s north shore last week, and across Sydney, including near Jewish sites.

Here is another poster that incites violence. “Join your fellow faggots,” it says. The poster says that “16% of sodomites have attempted suicide” and “up to 50% of trans ‘people’ have attempted suicide”. There’s a black silhouette picture of a man shooting himself in the head. This poster appeared at the University of Tasmania last September.

Another poster inciting violence features a gun pointed at the head of a man wearing a “gay and proud” T-shirt. The bullet has entered his head. The poster blares: “Get the sodomite filth off our streets”. It was at Swinburne University in Melbourne on October 9, 2016.

Read the article by Janet Albrechtsen in The Australian.